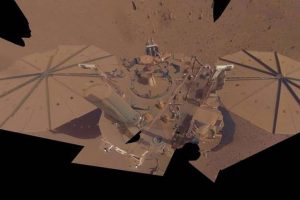 After four years of conducting research on Mars, NASA has wrapped up its InSight mission. The decision to end the mission was officially made after mission controllers were unable to make contact with the Mars lander, deducting that its solar-powered batteries had finally run out of energy.

The last time InSight communicated with Earth was on December 15. Scientists had already decided that they would retire the missions if unable to make contact over two communication attempts. NASA has said it will continue to listen for a signal from the lander but noted that hearing from it at this point is “unlikely.”

Over the years it spent on Mars, InSight researched the deep interior of Mars’ layer, learning about the weather and quake activity using a highly sensitive seismometer. Many of Mars’ quakes, the lander learned, were caused by meteoroid impact.

“I watched the launch and landing of this mission, and while saying goodbye to a spacecraft is always sad, the fascinating science InSight conducted is cause for celebration,” said Thomas Zurbuchen, associate administrator of NASA’s Science Mission Directorate in Washington. “The seismic data alone from this Discovery Program mission offers tremendous insights not just into Mars but other rocky bodies, including Earth.”

“We’ve thought of InSight as our friend and colleague on Mars for the past four years, so it’s hard to say goodbye,” the mission’s principal investigator Bruce Banerdt said. “But it has earned its richly deserved retirement.”

In other tech news, Sam Bankman-Fried will be released on a $250 million USD bail.
Source: Read Full Article