The star and the creator of the Peacock crime thriller discussed its influences, including “Columbo,” “Murder, She Wrote” and “Magnum P.I.” 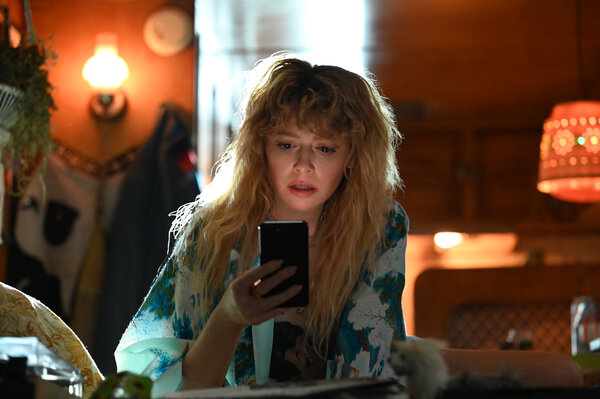 To make new television, it helps if you’ve watched a lot of old television. That’s a lesson evident in “Poker Face,” the crime-thriller series created by Rian Johnson and starring Natasha Lyonne, which makes its debut Jan. 26 on Peacock.

Lyonne, the sharp-witted star of “Orange Is the New Black” and “Russian Doll,” is cast in “Poker Face” as Charlie Cale, a woman with a preternatural ability to tell when people are lying. Embarking on a cross-country trip — how and why Charlie finds herself on the run are established in the show’s first installment — she grapples with new mysteries and new celebrity guest stars (including Benjamin Bratt, Ellen Barkin, Nick Nolte and Chloë Sevigny) in each of the series’s 10 episodes.

While “Poker Face” constructs an overarching narrative, its self-contained installments are a deliberate throwback to a style of TV storytelling that Johnson (the writer and director of “Knives Out” and “Glass Onion”) grew up with in the 1970s and ’80s.

“That’s when I had control of the television,” Johnson said. “And it was typically hourlong, star-driven, case-of-the-week shows.” They weren’t only detective programs like “Columbo” and “Murder, She Wrote,” he said, but also adventure series like “Quantum Leap,” “The A-Team,” “Highway to Heaven” and “The Incredible Hulk,” which were notablefor “the anchoring presence of a charismatic lead and a different set of guest stars and, in many cases, a totally different location, every single week.” Those ever-changing elements kept things fresh and surprising, he said.

Lyonne, who cultivated an appreciation for TV later in life, said she had been drawn to “Poker Face” for its blend of one-off and continuing narratives, as well as the opportunity to work with a creator like Johnson.

“Do I love David Milch? Yes. Do I love Rod Serling? Yes,” Lyonne said, adding that she also enjoyed “the mischief of being up to something with Rian.”

“I don’t feel like I have any pro or con bias on serialized or not-serialized television,” she said. “The best of these shows all transcend those models in their own original ways. But I find it very soothing to know that we’re linking up to precedents that I enjoy.”

In separate interviews, Johnson and Lyonne shared a few of their favorite episodes of these past shows — some that were direct influences on “Poker Face,” some that were personally meaningful to them and some that they simply can’t get out of their heads. Here are edited excerpts from those conversations.