Home » National Air And Space Museum’s Latest Treasure Is From A Galaxy Far, Far Away

National Air And Space Museum’s Latest Treasure Is From A Galaxy Far, Far Away

The Smithsonian’s National Air and Space Museum is showing off its latest display: a full-sized X-wing starfighter used in the 2019 film “Star Wars: The Rise Of Skywalker.”

The prop, which was Poe Dameron’s ship in the film, has a wingspan of 37 feet and is on long-term loan from Disney-owned Lucasfilm.

The museum shared an image of the starfighter in the Restoration Hangar at the museum’s Steven F. Udvar-Hazy Center, where it will be visible to the public as conservation work is done. By late next year, the X-wing will move into the main museum on the National Mall, where it will be on display outside the Albert Einstein Planetarium. 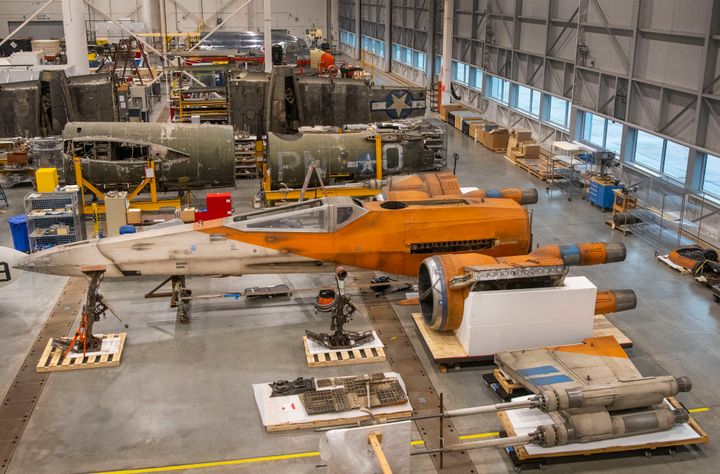 “Despite taking place a long time ago in a galaxy far, far away, Star Wars introduced generations of fans here on Earth to outer space as a setting for adventure and exploration,” Margaret Weitekamp, space history chair at the museum, said in a news release. “All air and space milestones begin with inspiration, and science fiction so often provides that spark – the iconic X-wing displayed amid our other spacecraft celebrates the journey from imagination to achievement.”

The museum last featured Star Wars items and props during a 1997-1999 exhibition created by the Smithsonian called “Star Wars: The Magic of Myth,” which toured internationally after it closed in Washington. The exhibition is still available online via a very 1990s-looking website.

The National Air and Space Museum also has a number of other movie props in its collection, including the original studio model of the Enterprise used on the “Star Trek” TV series.

The museum is currently in the middle of a major multi-year, multiphase renovation project.