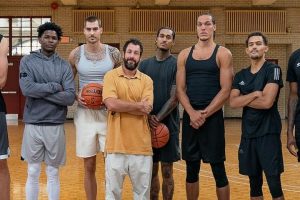 The film and Sandler have received immense praise from the NBA’s current stars and forever legends for the casting and authenticity of the league experience. Under his $350 million USD deal with the streaming service, his sports drama flick Hustle follows the events of a basketball scout as he embarks on his journey to the NBA. Unlike his other ventures with Netflix, Hustle has received some of Sandler’s best reviews, even scoring an 89% on Rotten Tomatoes. To ensure the authenticity of the NBA scouting experience, Sandler made it a point to cast those within the league so that they can put their experiences on the screen.

In a recent behind the scenes video released by Netflix, NBA stars from current and past eras including Julius “Dr. J” Erving, Kenny Smith, Doc Rivers, Seth Curry, Trae Young and more discuss how the incorporation of true basketball professionals in the film has made the story true to experience. Current Utah Jazz player Juanch Hernangómez makes his film debut as the titular Bo Cruz the standout rookie prospect who gets Stanley’s (Sandler) attention and help to make it to the big leagues.

Watch above to see how the NBA stars were incorporated to make the Hustle storyline more authentic.

In case you missed it, Netflix has teased the release and official title of Knives Out 2.
Source: Read Full Article