Neediest Cases Beneficiary Continues to Face Adversity With a Smile

“This kitchen is seasoned with love,” reads one stenciled on a kitchen wall. The upbeat expressions extend to Ms. EL-Amin’s Facebook page, where she describes herself as “The lovable, likable, laughable individual living life!!”

In a recent interview at her home in Carteret, N.J., she said she believed in embracing positivity. The more you keep things bottled up, “the more you will be in a negative space,” she said, adding, “I talk about my problems all the time. I make light of them.” 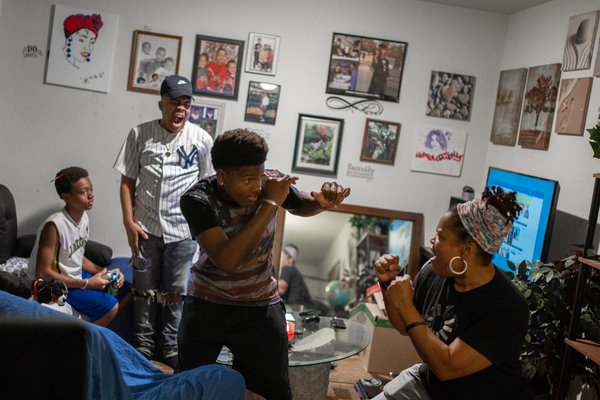 That outlook — along with determination, creativity and energy — have propelled Ms. EL-Amin, 42, through many tough times.

Born in Brooklyn, Ms. EL-Amin moved to North Carolina with her family when she was 6. In 2006, she returned to New York in search of new opportunities.

It was not an easy transition.

It took six months to find work as a billing clerk at a carpet and tile plant. That lasted a year before the company reduced its staff. She then worked for two years as a financial analyst at a Manhattan company before she was laid off. During some of those unsteady stretches, she slept on the floor of an aunt’s apartment.

Years later, she found herself heating her Brooklyn apartment with the stove and wondering how to get winter coats for two of her sons, then ages 7 and 8.

Her sons were attending the Gary Klinsky Children’s Center at Public School 149, run by Brooklyn Community Services, one of the eight organizations supported by The New York Times Neediest Cases Fund.

A social worker at the school secured about $200 from the fund for the coats, and The Times highlighted Ms. EL-Amin’s story in January 2011. At that time, she had $428 to her name.

After the article appeared, Ms. EL-Amin said she received donated book bags and skateboards for her sons and care packages of food. An anonymous benefactor paid her rent for two months.

“That felt so good, to realize that there are human people out there,” she said. “I was so thankful to The New York Times. They just helped a lot.”

The article also paved the way for a job offer. She said the Fedcap Group, a Manhattan-based nonprofit, “really rolled out the red carpet for me,” and she has been doing custodial work for it since then. In the time since the article appeared, she has earned a master’s degree in health information management from Kaplan University and moved several times, landing in Carteret for what she said were better schools for her sons.

Ideas for other books she wants to write include “A-Men,” about four women in college who grew up together but cannot find men in their lives, and “Super Momma,” about a pregnant mother of three children, one of whom is convinced she is a bona fide superhero.

During her interview, Ms. AL-Amin wore a T-shirt with a circle of broken lines, like the graphic that appears on a screen when a computer is processing. The shirt read, “I’m thinking.”

In the course of 90 minutes, she outlined one idea after another: ways to help homeless people with housing, ambitions for her own house-flipping business, and EL-Amin Enterprises, an umbrella company for several ventures, including CDC: Computer Designs and Cosmetics, a notion she came up with when she was 8.

Ms. EL-Amin is quick to laugh and engage in good-natured teasing with her sons Khalique, 21, Rakim, 16, and Emmanuel, 15. But her easygoing demeanor belies the serious challenges she faces.

Her “baby brother,” with whom she was very close, died after a stroke in November 2017 at the age of 39. Ms. EL-Amin, whose oldest brother was murdered in 1998, said the most recent loss put her into an emotional tailspin.

Further complicating things: She has asthma, diabetes, arthritis and $150,000 in student loans. Her parents, who live in West End, N.C., about 85 miles east of Charlotte, are in poor health. She plans to move in the summer to be near them.

“This is going to be culture shock for my kids,” she said. Referring to Carteret, she said, “this is the concrete jungle here,” adding that she will have to adjust to the raccoons and snakes that come with rural living.

She hopes her degree in health information management will help her get a job at a hospital in North Carolina. Though her future is uncertain, Ms. EL-Amin embraces her attitude as “the lovable, likable, laughable individual living life.”

“I wish I could say like ‘The Jeffersons’ that ‘we’re moving on up,’” she said. “In life there will be struggles, but I don’t give up. My goal is to top myself — regardless of where I’m at — to go to the next step.”