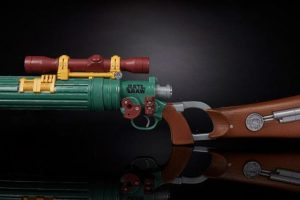 Celebrating Disney+’s The Book of Boba Fett, this blaster comes in a colorway themed on Boba Fett’s armor and sees three cylinders that hold four darts each. Sized at 30 inches, the blaster also has a grip stock, an electronic scope, and also has sound effects.