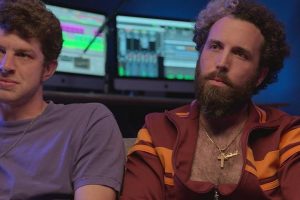 Netflix has dropped an official trailer for its upcoming docuseries, Eat the Rich: The GameStop Saga. The new three-part series follows the events of the stock market upset that occurred during the pandemic when a group of internet-savvy investors banned together on Reddit to essentially, take down the rich.

The docuseries breaks down the events step-by-step so audiences can understand just how the whole GameStop debacle came about. Many of the interviewees in the series explained what got them to invest in the stocks in the early days of COVID. A subreddit thread called WallStreetBets was created for those who were beginning to learn the ins and outs of trading. After hearing that GameStop was going to financially crash, the members of the platform began to push for the idea to flood the company with investments so it would make them a great deal of cash. As more and more investors joined in, it ramped up the stocks and Wall Street stepped in. The events following caused the situation to be one of the most talked about scandals in the last year.

Check out the trailer for Eat the Rich: The GameStop Saga below and binge the limited series on Netflix starting on September 28.

In other entertainment news, Timothée Chalamet shares important career advice given to him by Leonardo DiCaprio.
Source: Read Full Article