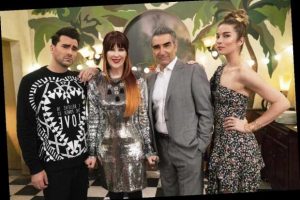 Pop a bottle of your best zhampagne because Netflix just released Schitt’s Creek‘s final season ahead of schedule. "Surprise! Season 6 & the Best Wishes, Warmest Regards documentary just dropped early on [Netflix and Netflix Canada]. Have a great weekend!" Emmy winner Daniel Levy, who created and also stars as David Rose in the comedy, tweeted on Saturday morning, adding a requisite "*all things considered…" along with a Moira Rose GIF.

Netflix previously announced that Schitt’s Creek Season 6, which first aired on CBC in Canada and Pop TV in the United States earlier this year, would become available to stream on their platform on Oct. 7. The hour-long Best Wishes, Warmest Regards: A Schitt’s Creek Farewell behind-the-scene special premiered on April 7, following the series finale.

Schitt’s Creek is fresh off some history-making Emmy wins, sweeping all seven comedy categories at this year’s mostly virtual ceremony. In addition to becoming the most awarded comedy in a single year, the sitcom is also the first comedy to win all four main acting awards in one year: Eugene Levy (Johnny Rose) and Catherine O’Hara (Moira Rose) won outstanding lead actor and actress in a comedy series, while Daniel Levy and Annie Murphy (Alexis Rose) took home statuettes for outstanding supporting actor and actress in a comedy series.

END_OF_DOCUMENT_TOKEN_TO_BE_REPLACED

END_OF_DOCUMENT_TOKEN_TO_BE_REPLACED
We and our partners use cookies on this site to improve our service, perform analytics, personalize advertising, measure advertising performance, and remember website preferences.Ok