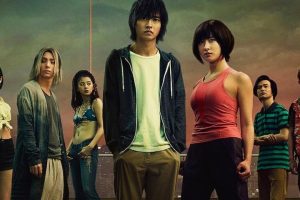 For the Netflix Festival Japan 2021 event, the streaming platform delivered the “New Live-Action Japanese Lineup” video which previews a number of series coming in the near future.

Included in the range is the first look at Season 2 of the live-action adaptation of Haro Aso’s Alice in Borderland manga. Premiered back in 2020 in 190 countries, the show was once the most viewed live-action series in Japan last year and ranked in Netflix’s top 10 in 40 countries and territories worldwide.

The Japanese survival thriller is centered around friends Ryōhei, Karube and Chōta, who find themselves transported to a parallel world devoid of people and forced to participate in survival games and find their way back. Staring Kento Yamazaki, Tao Tsuchiya, Yuzuha Usagi, Alice in Borderland is directed by Shinsuke Satō with planning and production by studio ROBOT.

Check out the teaser for Season 2 of Alice in Borderland above.