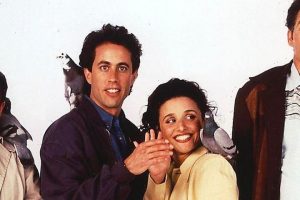 After the much-anticipated release of Seinfeld on Netflix, fans of the shows seem to be majorly disappointed with the way the streaming giant has aired the show.

Various viewers have taken to Twitter to comment on the fact that Netflix neglected to keep the original 4:3 aspect ratio and used 16:9 instead. Rolling Stonepointed out that the 16:9 ratio offers a more “modern look,” since the standard widescreen would make it more suitable for view on high-definition TVs. Unfortunately for Seinfeld fans that means that the switch from the full-screen mode or square screen quite literally means that some of the most iconic jokes from the show are cut off.

Audiences were quick to point out that the famous scene from season eight’s “The Pothole” episode had lost its punchline as the pothole in question is completely out of frame. In that particular scene, George Costanza, played by Jason Alexander, complains to Jerry Seinfeld about the “titular erosion” while on the street. The ratio also crops out Seinfeld’s sneakers, which have been a huge highlight throughout the series.

Check out some of the fan reactions below.