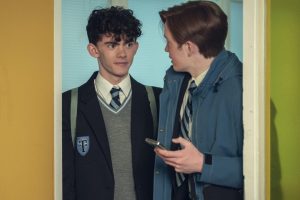 If you’re yet to add Netflix’s Heartstopper to your watch list, it’s time to do just that. Here’s why.

When I sit down to watch TV, I’m usually in the mood for one of two different types of shows.

The first type is something dark and mysterious, like a true crime drama or dystopian series, and this is usually relatively easy to find. Scroll through any streaming service and you’ll see what I’m talking about – these days, you’d find it hard to consume every new twisted series that makes its way to our screens.

But the second type of show I tend to look for is a lot harder to find. It’s what I tend to describe as a ‘comforting’ TV show – something that makes me smile and/or helps to restore my faith in the world.

Netflix’s Heartstopper: the trailer for the upcoming LGBTQ+ coming-of-age drama is here and has got the internet calling it the “anti-Euphoria”

Over the last couple of years, I’ve relied on shows like these more and more to help me switch off at the end of the working day – but aside from revisiting the likes of Schitt’s Creek, Friends and Gilmore Girls, I’ve found it hard to discover new titles that leave me feeling this way.

That was until I stumbled upon Netflix’s new series, Heartstopper. Based on a series of graphic novels by Alice Oseman, the show – which currently holds a rare 100% fresh rating on the reviews site Rotten Tomatoes – follows the story of Charlie Spring (Joe Locke) and Nick Nelson (Kit Connor), who begin to develop feelings for each other after sitting together at school.

It won’t take you long to fall in love with Heartstopper’s ensemble of characters.

While Charlie is very confident in his sexuality, Nick is a little confused at first and finds himself coming to terms with how he feels over the course of the series – a journey which is portrayed with a tenderness that is refreshing to watch.

But the relationship at the core of Heartstopper isn’t the only reason why the series is so brilliant and heart-warming. Not only is the show uplifting in the best way – the show touches upon the homophobia and bullying its characters have faced or are currently dealing with, but it tends to focus in on moments of romance rather than moments of trauma – but it also features an amazing ensemble of characters.

These include Elle (Yasmin Finney), a transgender girl navigating life at a new girls’ school, and Tara (Corinna Brown) and Darcy (Kizzy Edgell), two of Elle’s classmates whose friendship has more layers than anyone suspects. There are also Charlie’s best friends, Tao (William Gao) and Isaac (Tobie Donovan), whose support and concern for their friend is enough to make your heart melt.

While I’m yet to finish Heartstopper in its entirety (I don’t want it to end!), I can safely say this is one you should be adding to your watch list.

It may not have the high stakes and drama of many of the shows you’ll find on Netflix these days, but it’s sure to make you smile – what more could you want?

Heartstopper is now available to stream on Netflix