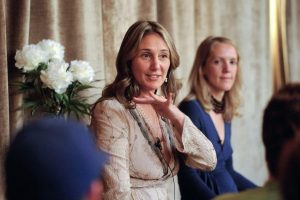 Controversial health and wellness brand One Taste is the hot topic of a new Netflix documentary – here’s everything you need to know about it.

If you don’t want to see another story of a health and wellness company gone bad, you might want to look away now.

The official description of Orgasm Inc: The Story of OneTaste, Netflix’s new documentary about the demise of problematic wellness group OneTaste reads: “A sexual wellness company gains fame and followers for its practice of ‘orgasmic meditation’ – until members come forward with disturbing allegations.”

Sarah Gibson and Sloane Klevin, the directors who previously brought us the Netflix original documentary Britney vs Spears, examine the controversial story of OneTaste’s spectacular rise and fall from grace. Keen to know more about the true story? Read on for more about the new Netflix documentary …

Created in 2001, Daedone’s wellness brand promised spiritual enlightenment through the practice of ’orgasmic meditation’ – a combination of mindfulness and orgasm. Fitting neatly into San Francisco’s tech bubble, Daedone maintains that she adapted the term from Buddhist and tantric practices, where mediation is combined with sexual stimulation.

With the promise of 15-minute orgasms and a community built on physical, mental and spiritual liberation, the company went from strength to strength, with a large and loyal client base.

But the documentary casts doubt on the validity of Daedone’s claims, revealing a darker side to the business, with former members alleging far more sinister goings-on behind the scenes.

Originating as a teaching business with a focus on female orgasms, Daedone and her business partner Robert Kandell have been besieged by claims of prostitution, fraud, cult-like behaviour and trafficking, to name a few, leading to the once-celebrated company closing its doors in 2018.

The company is subject to an ongoing FBI investigation, with its founders ferociously defending themselves, claiming in a Medium newsletter: “Our rapidly growing education company and personal empowerment movement – formed to help people grow and heal – had been flipped upside down and cast as one organised to exploit and harm.”

Who is Nicole Daedone?

Daedone was once the darling of the wellness world and is seen as OneTaste’s spiritual leader. Back in 2011, her TED Talk garnered the brand recognition and financial backing from both investors and celebrities alike.

However, her fall from grace has been seismic, as she sold her 15-year stake in the company in 2017 and fled the country.

Nicole Daedone, the founder of OneTaste.

Is there a trailer for Orgasm Inc: The Story Of OneTaste?

There most certainly is. In it, we get a sense of how OneTaste exploded onto the sex, health and wellness scene, intriguing reporters and garnering a loyal legion of fans.

But soon, we see a darker side to the company, one of expensive subscriptions and deceit. As one follower says in the trailer: “It went from utopia to a hell hole.” Another says: “People were psychologically brutal with each other.” What is it about this group that people were drawn to and how did it fall from grace?

Watch the trailer for yourself here:

What do the group make of Orgasm Inc: The Story Of OneTaste?

The show itself isn’t without controversy, with some OneTaste members claiming the documentary uses “stolen footage”. According to the group, which goes by the moniker The Real People On OneTaste, the documentary was “largely produced using footage that was stolen and sold to the producers”, and includes “very sensitive and private facts of our lives WITHOUT our permission”.

It’s said there’s no smoke without fire, and the documentary certainly makes for challenging viewing. We’ll leave you to form your own opinions of it, but let’s just say the company’s newest incarnation, the Institute Of Om, may not be one you want to Google at work.

When and where will Orgasm Inc: The Story Of OneTaste be available to watch?

Orgasm Inc: The Story of OneTaste premieres on Netflix on 5 November.