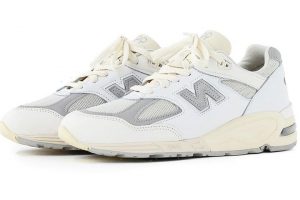 It only took a few rounds of footwear collaborations with Aimé Leon Dore for New Balance to quickly realize that Teddy Santis‘ design language strongly resonates with sneaker culture fanatics. The brand clearly values his style sensibilities and design perspective and as a result, brought him on as a creative director back in April 2021. One year later, his first Made in USA collection is gradually starting to be distributed, and the next release on his agenda is the New Balance 990v2 Made In USA “Sea Salt” colorway.

Much like the previously-launched New Balance 990v3 Made In USA “Sea Salt” colorway, this newest iteration leans on a collection brighter neutrals. Mesh underlays and the smooth leather overlays match up with angelic finishes, while smaller hints of gray are dispersed to the N logos, toe box overlays and the heels. USA text is integrated into the oval-shaped heel windows while the traditional 990 branding is laid down on the tongues. In addition, cream accents don the tongues, laces and semi-chunky midsole units for extra vintage flair.

For those interested in purchasing a pair, Aimé Leon Dore has now opened up its raffle. Retail price is set at $195 USD.