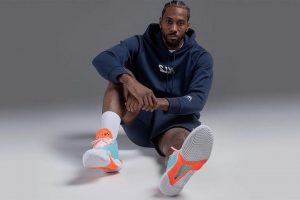 New Balance signed NBA All-Star Kawhi Leonard to be the face of its hoops category in 2018, and for good reason given that he’s played pivotal roles in earning championship victories for the San Antonio Spurs and the Toronto Raptors. 2022 marked the next phase of Leonard’s signature shoe lifespan as he is gradually rolling out more iterations of the New Balance KAWHI 2, and the model’s latest “Ocean Blue” colorway has just been announced.

For this new installment. the New Balance design team wanted to channel the Clippers guard’s “go with the flow” mentality that he displays both on and off the hardwood. An aquatic blue hue leads its visual composition and is present along the side panels to represent his calm poised demeanor, while the various white accents are emblematic of the speed, grace and grandeur of tall ships and sailing vessels. To further express its nautical motif, “Dynomite” orange accents reminiscent of life rings make their way onto the uppers as well as boat-inspired icons on the tongues.

If you’re interested in copping, you can find these releasing via New Balance and select retailers on May 13 for $160 USD.

In other news, the New Balance 550 is coming in a “White/Grey” colorway.
Source: Read Full Article