New Balance Launches MADE "Version Series" with New MADE 990v1 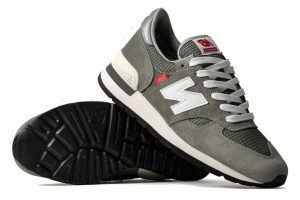 The 40th anniversary of New Balance‘s seminal 990 line is around the corner, so the brand is paying homage to 990 lineage with a new MADE “Version Series,” which is set to be kicked off with a classic 990v1. First released in 1982, the 990v1 was known for its sleek design and high price point — it was the first runner ever with an MSRP of $100 USD ($277 USD in 2021 dollars). Since then, it’s served as the starting point for one of New Balance’s most successful franchises, so this MADE iteration both honors its genesis and salutes its forthcoming anniversary.

Crafted in the United States, the 990v1 “Version Series” boasts a traditional mixture of mesh and suede, all dressed in gray and centered around a large white N logo on the midfoot. However, unlike the OG 990v1, the “Made Series” adds ruby red into the mix via midfoot and tongue tags plus a spellout graphic on the silver heel piece. Down below, the look is finalized by special printed insoles, a bone-colored heel clip, a two-tone black and white EVA foam midsole and black rubber outsoles.

Expect the New Balance 990v1 MADE “Version Series” to release on the New Balance webstore come June 17. It’ll be followed up by similarly-styled takes on the 990v2, 990v3 and 990v4 over the summer and fall months as well.