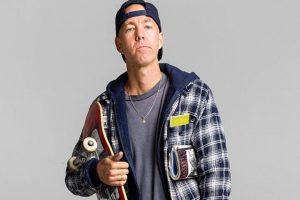 From Lakeland, Florida, Reynolds first garnered attention in the skating world for his talked-about tricks in amateur skateboarding competitions across the Southern state in the early 1990s. Upon gaining notoriety in the sport, he was personally recruited by Tony Hawk to join his newly-established imprint, Birdhouse Skateboards, and subsequently moved to California to pursue skating full-time.

Today, Reynolds is known as one of the most productive skaters in the professional sphere, with more than 40 video appearances for several of the industry’s top-shelf brands. Among his plentiful productions, Reynolds has appeared in The End (1998), Baker2G (2000), This is Skateboarding (2003), Baker 3 (2005), Stay Gold (2010) and Baker 4 (2019). As for his accolades, Reynolds was named Thrasher Magazine‘s Skater of the Year in 1998 and has since been included in eight versions of Tony Hawk’s Pro Skater video game.

“My goal is to skate as hard as I can, for as long as I can. New Balance’s attention to detail and their focus on the team’s needs is what first drew me to the brand,” said Reynolds in a statement. “I believe they are making the best skate shoes for me right now. I love that Numeric, the skate division, is a focused team of people that I can continue to grow with; I already feel at home and energized.”

“It’s a special feeling knowing that New Balance Numeric is contributing to keeping a legend such as Andrew Reynolds skating for as long as possible,” said Tyrone Romero, Global Marketing Manager at New Balance Numeric. “Skateboarding needs Andrew Reynolds; we are very happy to be supporting his skateboarding and vast contributions to our culture.”