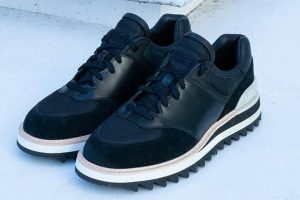 New Balance‘s Tokyo Design Studio line has returned to its updated 574 silhouette for a sleek new colorway. Dubbed the TDS 574, the sneaker originally arrived in grey back in April, before white and navy colorways followed a few months later.

For the latest release, New Balance Tokyo Design Studio has dressed the silhouette in an all-black colorway. The TDS 574’s upper is constructed from suede and leather, with a number of details taken from formal footwear rather than sneakers. Other features include a Vibram outsole — also in black — and New Balance’s logo embossed onto the heel. The label’s signature “N” logo has been removed, further adding to the silhouette’s formal influence.

The black colorway of the TDS 574 is reportedly due to release on December 4, and will be exclusive to Japan. The sneaker will be available. from retailers including New Balance’s Japan web store, Dover Street Market Ginza and New Balance’s T-HOUSE concept store.