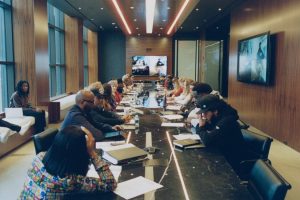 A year ago, as protests spread across the country following the murder of George Floyd, the music industry promised to change.

Major record labels, streaming platforms and broadcasters pledged hundreds of millions of dollars in charitable donations. The diversity of the music industry itself — a business that relies heavily on the creative labor of Black artists — came under scrutiny, with calls to hire more people of color and to elevate women and minorities into management and decision-making positions.

But how diverse is the music business? The answer, according to a new study: not very.

A report by the Annenberg Inclusion Initiative at the University of Southern California, released Tuesday, examined the makeup of 4,060 executives, at the vice president level and above, at 119 companies of six types: corporate music groups, record labels, music publishers, radio broadcasters, streaming services and live music companies.

Among those executives, 19.8 percent were from underrepresented racial and ethnic groups, including 7.5 percent who were Black. Women made up 35.3 percent of the total.

Delving deeper into the numbers, the authors of the 25-page report, led by Stacy L. Smith and Carmen Lee, found that the representation of women and minorities seemed to shrink as they looked higher up music companies’ organization charts.

After filtering out subsidiaries, the researchers looked at the uppermost leadership positions — chief executives, chairmen and presidents — in a subset of 70 major and independent companies, and found that 86.1 percent of those people were both white and male. The 10 people of color who held those positions were all at independents, and just two were women: Desiree Perez, a longtime associate of Jay-Z who leads his company Roc Nation, and Golnar Khosrowshahi, the founder of Reservoir, which owns music rights.

The report includes some stark findings. For example, among the 4,060 people in the study’s sample, the researchers found 17.7 white male executives for every Black female one.

“Underrepresented and Black artists are dominating the charts, but the C-suite is a ‘diversity desert,’” Dr. Smith said in a statement. “The profile of top artists may give some in the industry the illusion that music is an inclusive business, but the numbers at the top tell a different story.”

Each year since 2018, the Annenberg Inclusion Initiative has tracked the artists, songwriters and producers behind the biggest hits. Again and again, it has found that women are far outnumbered by men, yet revealed some encouraging numbers for underrepresented groups: People of color have made up about 47 percent of the credited artists behind 900 top pop songs since 2012.

Yet the group’s new report, called “Inclusion in the Music Business: Gender & Race/Ethnicity Across Executives, Artists & Talent Teams,” and sponsored by Universal Music Group, shows that women and people of color are poorly represented in the power structure of the industry itself.

The variation across different job levels and industry sectors is notable. Black executives fared best within record labels, making up 14.4 percent of all positions, and 21.2 percent of artist-and-repertoire, or A&R, roles, which tend to work most closely with artists. Blacks hold just 4 percent of executive jobs in radio, and 3.3 percent in live music.

According to U.S. census data, 13.4 percent of Americans identify as Black.

Women posted their highest executive numbers in the live music business, holding 39.1 percent of positions. But drilling down, the study found, most of those women were white. Even at record labels, where Black executives were best represented, Black women held only 5.3 percent of executive jobs.

The U.S.C. report is one of a number of efforts underway to examine the music industry and evaluate its progress in reaching stated goals of diversity and inclusion. This week, the Black Music Action Coalition, a group of artist managers, lawyers and other insiders, is expected to release a “report card” on how well the industry has met its own commitments to change.

Much of the data used in the U.S.C. report, the researchers said, came from publicly available sources, like company websites. The report suggests that a lack of participation in the study by music companies was a reason.

“Companies were given the opportunity to participate and confirm information, especially of senior management teams,” the report says. “Roughly a dozen companies did so. The vast majority did not.”

The authors of the report, who also include Marc Choueiti, Katherine Pieper, Zoe Moore, Dana Dinh and Artur Tofan, said they want to spur the industry toward change. The report recommends a number of steps that companies can take to make their executive ranks more diverse, including making career pathways more flexible and “fast tracking” leaders with support and mentoring.

“Our hope,” Dr. Lee said, “is that the industry will come together to tackle this problem in a way that creates meaningful progress.”