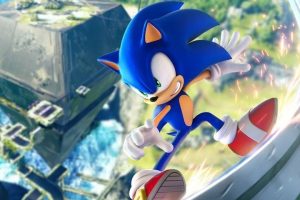 Throughout 2022, SEGA has treated Sonic fans to plenty of teasers and trailers regarding the latest Sonic title, Sonic Frontiers. Showing off the “open zone” islands that players will explore, beautiful landscapes have already been revealed. Now, a closer look at what fans can expect from the famous hedgehog himself has been shared.

In SEGA’s latest Sonic Frontiers trailer, the focus was placed on showing off the new skill tree system and how combat will take place. For the first time in a Sonic game, Sonic has a skill tree, loaded up with new abilities for him to learn. To progress through skill trees, skill pieces are needed. This new item can be obtained via fallen enemies and breakable items around the islands. Moves such as drop dash make their return alongside a parry mechanic that serves as a counter. Additional looks at the various adversaries, including bosses was also shown off.

Sonic fans have but a few weeks left until the release of Sonic Frontiers as it’s scheduled to launch November 8. It will be available via the PlayStation 4, PlayStation 5, Xbox One, Xbox Series X/S, Nintendo Switch and PC.

In other gaming news, Secretlab teamed up with Naruto: Shippuden for a set of two gaming chairs, featuring Naruto and Akatsuki editions.
Source: Read Full Article