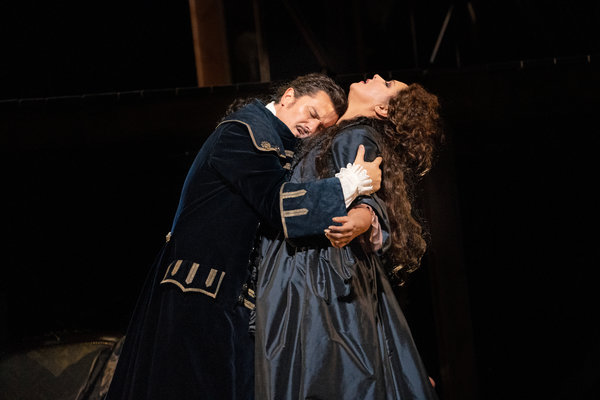 Happy new year! The Metropolitan Opera rang in 2019 with a boffo “Adriana Lecouvreur,” featuring a love triangle of Anna Netrebko, Anita Rachvelishvili and Piotr Beczala with enough sizzle to lead some critics to warm to the not-always-respected work. More on that in a second.

I was more than 4,000 miles away, celebrating in Vienna with a life-affirming 26-hour musical marathon: Strauss’s ‘’Die Fledermaus” at the State Opera on New Year’s Eve; more Strauss the next morning at the Vienna Philharmonic’s New Year’s Concert in the Musikverein; and the Vienna Symphony playing Beethoven’s Ninth that evening.

Is there a more musical city? In the New York of my childhood, aggressive street hawkers offered drugs to passers-by. In Vienna they sound almost as furtive, but their pitch is: “Concert? Opera? Strauss? Mozart?”

Here are some postcards. MICHAEL COOPER

I’ve often wondered: Do the star conductors the Vienna Philharmonic brings in each year for its New Year’s concerts actually conduct, given that this music is practically this orchestra’s birthright?

When I entered the mostly empty, majestically gilded Musikverein to watch the players rehearse with Christian Thielemann, the principal conductor of the Dresden Staatskapelle and music director of the Bayreuth Festival, I got an inkling. As he took to the podium, the shimmering strings announced that he was beginning the rehearsal at the end, with the traditional encore: Strauss’s “Blue Danube” Waltz. It is perhaps the most famous waltz there is, and one the orchestra could probably play in its sleep.

But Mr. Thielmann was not one to let the players set the coordinates to 3/4 time and go on cruise control. He stopped them quite a bit, at one point asking the cellos to shape one of its most familiar phrases differently, and he continued fine-tuning the piece until he was happy.

“It is wonderful to work with a strong partner,” Mr. Thielmann said in an interview, saying that he prefers orchestras like the Vienna Philharmonic, with strong points of view, to those that treat scores as blank slates to be filled in by conductors. “The weak partners are difficult.”

The New Year’s concert must be the world’s most widely seen regularly held classical music event: It is televised in 91 nations, and before the month is out, Sony plans to release it on CD, DVD and Blu-ray. This year there were 14 cameras in the hall; some of the cameramen hid behind the copious floral arrangements, like hunters in a duck blind.

A “Fledermaus” Without Second-Guessing

It is not easy to bring off “Die Fledermaus” these days. Should it be updated? Translated? Made “relevant”? Can it be performed with a suitably Viennese sensibility?

Without such second-guessing, the Vienna State Opera’s unapologetically old-fashioned Otto Schenk production, with opulent sets by Günther Schneider-Siemssen, still holds the stage on New Year’s Eve, as it has for years. (Mahler conducted it when he led the company.)

There were a few flash moments — the bass René Pape was the special guest in the second act, singing “Some Enchanted Evening” at Prince Orlofsky’s ball — but the evening’s chief pleasure was getting to see a production that took the work neither too seriously nor too lightly. The waltzes lilted, the patter went by quickly enough, and the cast amused — especially Adrian Eröd, who brought humorous, easy physicality to the role of the duped Eisenstein, and Annette Dasch, who brought operatic glamour to his wife, Rosalinde.

And walking out of the opera house in time for an al fresco mug of hot mulled wine, followed by a cold glass of champagne, on Kärntner Strasse, as fireworks exploded overhead at midnight, made the evening difficult to replicate.

An “Ode to Joy” for the New Year

For more than four decades, the Vienna Symphony has marked the changing of the year with Beethoven’s Symphony No. 9. While the Philharmonic’s morning concert was in the gilded Musikverein — where golden, topless caryatids seem to hold up the balconies and the richly coffered ceiling is even more dazzling than the crystal chandelier — the Symphony’s evening concert was in the stately Konzerthaus, with its Secessionist and Art Nouveau touches.

Something about seeing the physical differences of the two halls — the Musikverein opened in 1870, the Konzerthaus in 1913 — brought home just how long Emperor Franz Joseph, who was in power for both openings, reigned. They evoke different eras.

Andrés Orozco-Estrada, who will succeed Philippe Jordan as the orchestra’s music director in 2021, conducted, and managed to bring out the true strangeness of the Ninth. Under his baton Beethoven’s stops and starts and changes of direction still startled.

The stars of the Met’s new production of “Adriana Lecouvreur” could not be better: the ravishing soprano Anna Netrebko in the title role, the smoldering mezzo-soprano Anita Rachvelishvili as the Princess of Bouillon, and the clarion tenor Piotr Beczala as Maurizio, the dashing count both women love. It’s easy to overlook several excellent singers in supporting roles, especially the baritone Ambrogio Maestri as Michonnet, the gruff stage manager of the Parisian theater company where Adriana is a headliner. With his beefy voice and Falstaffian physique, Mr. Maestri often sounds like a kind of basso. And Falstaff, his signature role, which he has sung to acclaim at the Met, has also been the province of some major bass-baritones and basses. Still, Mr. Ambrogio is a genuine baritone, albeit with an exceptionally deep and booming voice, who has excelled as Puccini’s Scarpia and, as this excerpt from an “Aida” in Florence some years ago makes clear, Verdi’s Amonasro. Here, joining Hui He in the intense Act III duet, Mr. Ambrogio brings a winning blend of Italianate lyricism and robust power to his singing. ANTHONY TOMMASINI

END_OF_DOCUMENT_TOKEN_TO_BE_REPLACED

END_OF_DOCUMENT_TOKEN_TO_BE_REPLACED
We and our partners use cookies on this site to improve our service, perform analytics, personalize advertising, measure advertising performance, and remember website preferences.Ok