‘News of the World’ Review: Tom Hanks Does the Strong, Silent Type 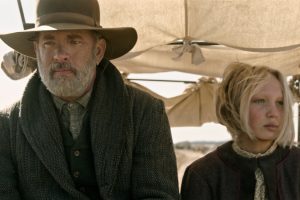 Nowadays, if you want a selection of news stories culled from various publications, you can use a cellphone app. But if you lived in Texas in 1870, you could pay a dime to watch Tom Hanks shuffle through a stack of newspapers and read selected articles aloud. It seems like a much better deal.

In “News of the World,” a modest, solid western directed by Paul Greengrass and based on the novel by Paulette Jiles, Hanks plays Captain Jefferson Kidd, a Civil War veteran eking out a post-bellum living as an analog news aggregator. Kidd, who fought on the Confederate side, travels from place to place, peddling a mix of diversion and information. He promises yarns that will distract his audiences from their own troubles, though his choices include reports on a meningitis outbreak, a coal mine fire and a ferry accident.

That all may count as entertainment given the grimness of the local situation. Five years after the end of the war, a state of simmering hostility persists across much of Texas. Union soldiers patrol the towns and roads, incurring resentment from a white population reluctant to rejoin the United States. Kidd stumbles on the aftermath of a lynching and hears frequent reports of violence against Indians and Mexicans. As is customary in westerns, this bloodshed is part of the film’s background rather than its overt subject. The title is a bit deceptive; the story is intimate and specific, and careful to tamp down any political implications that might make viewers uncomfortable.

Kidd is a variation on a familiar western archetype — a wandering soul who has seen and done terrible things and whose wariness around other people can’t disguise his fundamental decency. The first thing we see of the man are the battle scars on his torso, and before we’ve heard much about him we intuit that he has inflicted suffering as well as endured it. We know he’s a good guy, even if we don’t hear much about the Lost Cause he fought for — not an unusual choice in a western, but one which may have outlived its adequacy. Since this is Tom Hanks we’re talking about, kindness is the dominant note, and the drama arises less from the character’s internal ethical struggle than from the external challenges he faces in his quest to do the right thing.

Those challenges include various bad guys, wagon trouble, rough terrain and inclement weather. All that and more assails Kidd on his journey in the company of a young girl named Johanna (Helena Zengel). The child of German farmers, Johanna was kidnapped and raised by the Kiowa tribe, and has now been orphaned twice over. After a flurry of further misfortunes, Kidd takes it upon himself to deliver the girl, who speaks no English, to an aunt and uncle in Castroville, far away in the Hill Country.

In its bones, “News of the World” is a B western, lean and linear, its spare plot ornamented with efficient set pieces. Greengrass, one of the most inventive and rigorous action directors currently working — his chapters in the Jason Bourne franchise remain unsurpassed for velocity and spatial coherence — honors the genre tradition rather than trying to reinvent it. When Kidd and Johanna are chased down by some nasty outlaws along a treacherous ridgeline, the ensuing shootout is a throwback and a master class, as tight and mean and suspenseful as something in an old Budd Boetticher movie.

Other pleasures include a fine supporting cast (Elizabeth Marvel, Ray McKinnon and Bill Camp, among others) and the rapport between Hanks and Zengel, an impressively controlled young actor who refuses every temptation of cuteness. Neither performer overdoes the sympathy that develops between Kidd and Johanna, and the film is tender without descending too far into sentimentality.

But it can also feel a bit soft and puffed up. Too much true grit has been sanded off, too many hard truths of history nodded at and turned away from. The musical score, by James Newton Howard, is obtrusively important, and contributes to a sense that the scale isn’t quite right. This isn’t a bad movie. The problem is that it’s too nice a movie, too careful and compromised, as if its makers didn’t trust the audience to handle the real news of the world.

News of the World
Rated PG-13. Discreetly handled violence. Running time: 1 hour 58 minutes. In theaters. Please consult the guidelines outlined by the Centers for Disease Control and Prevention before watching movies inside theaters.

END_OF_DOCUMENT_TOKEN_TO_BE_REPLACED

END_OF_DOCUMENT_TOKEN_TO_BE_REPLACED
We and our partners use cookies on this site to improve our service, perform analytics, personalize advertising, measure advertising performance, and remember website preferences.Ok