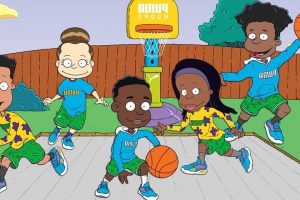 It’s been 30 years since Rugrats first aired on Nickelodeon, so the beloved cartoon is celebrating its milestone anniversary with a special

As mentioned above, seven products in total will release. However, only one has been revealed so far: PUMA Hoops‘ new Court Rider, a versatile basketball silhouette favored by LaMelo Ball, RJ Barrett and other PUMA team members. Its ’90s-centric colorway draws directly from the familiar Rugrats logo, boasting a teal, purple and green upper that wouldn’t look out of place with the uniforms of Ball’s Charlotte Hornets. This upper is embellished with a Rugrats logo on the tongue, a Nickelodeon hit on the heel and full-color printed insoles, while down below the Rider foam midsoles add orange and yellow into the mix to complete the shoe’s colorful inspiration.

Expect the rest of the Nickelodeon x PUMA Hoops Rugrats collection to be revealed in the coming weeks, and look for a drop sometime this summer. MSRPs have yet to be announced.