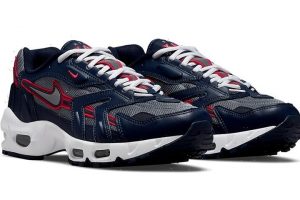 It’s been 25 years since

While this iteration isn’t officially tied to Team USA, it’s color palette is certainly reflective of the Olympic national squad. Its nominal color is used to tap onto the the upper’s leather overlays, tongues and interior lining. Bold red accents reminiscent of the stripes on America’s flag spill onto the throat’s banner, tiny Swooshes placed near the ankles, heel overlays and mid-foot trim. Lying beneath all of these aforementioned layers is mesh that is coated in a “Cool Grey” hue. Additionally, the heels and insoles are ornamented with five stars, the former of which see through to gray finishes while the latter deviates with a navy tone. Semi-chunky midsoles are cooked up with white walls and the outsoles finish its design off with a navy exterior.

These have released already via Nike Japan but a stateside drop is likely coming soon.