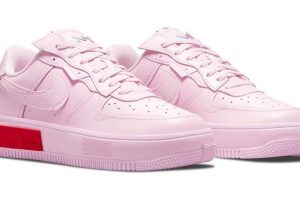 Known for revamping its classic models with new elements,

Set to debut in a pastel pink colorway, the Nike Air Force 1 Fontanka sports an all-pink feather upper with tonal overlays. Aside from the midfoot Swooshes, additional branding comes in the form of red, blue and green mini Swooshes embroidered on the tongue with a stacked “Nike Air Force 1” tag. Elevating the shoe is the React cushioning as a red “cassette” at the heel, which makes the pair distinct as ZoomX was applied on the Fontanka Edge that was released earlier. To complete the colorful design, a pink rubber sole rounds off the tonal silhouette.

Priced at $110 USD, the Nike Air Force 1 Fonatanka in Pink is expected to release in the coming weeks.