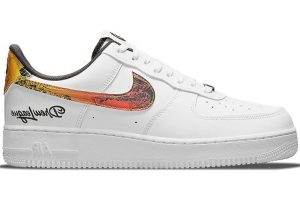 Like the first Drew League colorway that was released 2020, this variation boasts a mostly white leather build for its upper and plants the SoCal tourney’s name on the lateral heel in embroidered fashion. Where these kicks really get playful is on the Swooshes, heel overlays and insoles. Each of these components have been graced with street court chain gates and brick wall graphics along with “Drew League” spell outs formed with orange and yellow gradience which potentially speak to the breathtaking California sunsets. Lace dubraes that sit at the bottom of the throat are draped in black and the tongue branding substitutes the traditional Nike Air branding for a “D” logo and a tiny Swoosh.

Early reports have these slated to launch on July 30, but Nike has not confirmed this just yet.