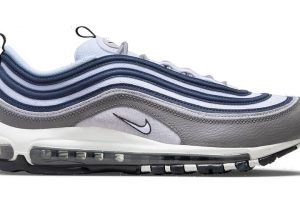 As one of Nike’s longest running partner universities, Georgetown has been celebrated by the Swoosh for decades. Thematic colorways across models from the Terminator High to the Air More Uptempo and Dunk Low have treated fans to clean gray and blue colorways. Now, the Hoyas — who are celebrating the end of a 29-game Big East losing streak in NCAAM college basketball — can look forward to the release of an Air Max 97 “Georgetown.”

In this iteration of the Japanese bullet train-inspired model, a gray tumbled leather mudguard is joined by a light blue base covered by reflective navy overlays. A silver section is revealed beneath the mudguard with a white Swoosh outlined in black. This shiny gray also covers the laces. A black with white text “air max” heel tab joins in at the rear while the Air-infused sole unit goes from “Sail” at the midsole to black at the rubber outsole, completing the look.

As of now, a release date for the