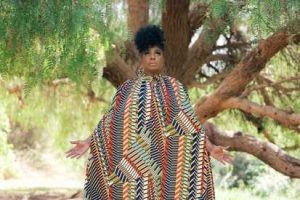 Mahalia. Patti. Gladys. The soul and jazz singer Ledisi has recently starred as each of these iconic Black women on the big and small screens. But Nina Simone is the musician who saved her life almost 20 years ago.

“I first heard Nina sometime in 2003,” Ledisi, 49, recently recalled in a video interview from her Los Angeles home, wearing a black long-sleeve T-shirt that read “Spiritual Gangster.” “I was on my rocking chair on my porch in East Oakland, and I was depressed. This was after I recorded two albums, but I had bills, just got divorced, hated the area, and felt like I was not growing. So I decided, ‘OK. This is the day. I’m going to leave this earth.’”

As she sat contemplating her death, a song on the radio interrupted: Simone’s version of “Trouble in Mind.”

“It jumped me out of my skin,” Ledisi said enthusiastically, while imitating Simone’s hands on the piano and quoting the lyrics she sang: “Trouble in mind, I’m blue/But I won’t be blue always/’Cause the sun is gonna shine/In my backdoor some day.” Ledisi said she “just cried and cried, and as the song kept playing, I started feeling better.” She knew she was going to survive that day. “That’s when Nina and I really met.”

On Friday, Ledisi will pay tribute to the woman who brought her back from despair with “Ledisi Sings Nina,” an album that features seven of Simone’s most popular songs redone in orchestral, jazz and pop arrangements. They showcase both the diversity and depth of Simone’s musicianship and the breathtaking range and reach of Ledisi’s own voice.

Ledisi’s career, now two decades deep, felt predestined. Born Ledisi Young in New Orleans, she comes from a long line of Black musicians. Her mother, Nyra Dynese, was a soul singer; her stepfather, Joseph Pierce III, a drummer; and her biological father, Larry Saunders, was both the son of the blues artist Johnny Ace and a singer in his own right, best known for his single “On the Real Side” that he released as the Prophet of Soul.

When Ledisi first appeared onstage with the New Orleans Symphony Orchestra at age 8, it was both a revelation and a continuation. Five years after, her family moved to Oakland, where she later started her funk bank, Anibade. By 2000, she independently released her first solo album, “Soulsinger: The Revival,” and its follow-up, “Feeling Orange but Sometimes Blue,” which garnered strong critical acclaim, a core fan base and an eventual record deal with Verve.

Pigeonholed as a jazz vocalist, Ledisi was both highly respected and niche in an industry that did not really know how to market her. Appearing on BET’s first televised “Black Girls Rock!” ceremony in 2010, she and the R&B sensations Marsha Ambrosius, Jill Scott and Kelly Price stole the show with their performance of Simone’s anthemic “Four Women.” Ledisi had only one request: that she handle the song’s climactic ending about Peaches, the fiery character in this epic tale of four Black women, each distinguished by her age, skin color and resistance to her racial and sexual trauma.

When Ledisi got her 34 seconds, she “made it count,” she said, belting “My name is Peaches!” with so much fierce determination and subversive spirit that she has made many return appearances on the BET tribute stage.

“I’ve been Nina-ing since,” Ledisi explained. In 2017, she incorporated songs from Simone’s repertoire into her concert with the National Symphony Orchestra (NSO Pops) at the Kennedy Center. The next year, she headlined a tribute to Simone in New Orleans with the drummer Adonis Rose and his New Orleans Jazz Orchestra, which she followed up with “Nina & Me” at the Apollo Theater a month later. In 2019, she starred in her own one-woman show, “The Legend of Little Girl Blue,” about herself, her mother and Simone; and a few months later, she paid homage again by accompanying the conductor Jules Buckley and the Metropole Orkest at London’s Royal Albert Hall. Just last December, PBS aired her first TV special, “Ledisi Live: A Tribute to Nina Simone.”

Produced by her long-term collaborator Rex Rideout, “Ledisi Sings Nina” is her 10th studio album, and her second on her own label, Listen Back. It’s arriving at a moment of what many see as long-overdue recognition: After receiving 13 Grammy nominations over the years, she earned her first statue, for best traditional R&B performance, in March for “Anything for You.” But it also marks another milestone: Ledisi’s return to her roots as a soul and jazz singer who in the late ’90s sold her CDs directly to her fans after shows or in record stores.

“This is a full-circle moment for her,” Rideout said in a phone interview, his enthusiasm evident. “Back then, she was fiercely independent and didn’t have a major-label deal but she was selling 40,000 to 50,000 records on her own, through consignment out of her trunk.” He went on, “Now you have streaming, and social media and artists can connect directly to the audience. She was kind of ahead of her time.”

John Legend remembered being blown away by Ledisi in 2002, when he opened for her at the New York club S.O.B.’s. “As a contemporary vocalist, there’s almost no one I can think of in the world that sings as skillfully as she does,” he said in an interview. “In terms of her range, dexterity, clarity, versatility, she can do anything she wants. She’s one of the great singers in the world, period.”

Ledisi’s voice is powerful, but technically, it isn’t much like her idol’s. Simone is known for her husky tone and limited octave range, while Ledisi exudes warmth onstage and covers four octaves, easily adding exuberant hollers, sophisticated scats, sultry rasps or quiet harmonies.

But when Buckley wanted a vocalist with the grit and gravitas that he associated with Simone to sing atop the Metropole Orkest, a jazz and pop orchestra based in the Netherlands, Ledisi was always his first choice.

“I was really trying to find an artist who could balance the power of a huge orchestra behind them, and lift that orchestra and the audience up as well,” he said. “She was able to shed a light on Nina’s work but not as an imitation, but as something fresh and new. This is because she’s not just replicating, but doing her own thing.”

“I’m Going Back Home,” typically performed as an upbeat gospel tune, gets transformed on “Ledisi Sings Nina” into a rollicking celebration.

“It’s part of our tradition here to end with a song that’s a New Orleans second line to which we can dance out, leave the stage, and go into the audience and come back,” said Rose, of the New Orleans Jazz Orchestra. Ledisi “just brings the spiritual and intangible components to the music and her stage performance.”

While Mahalia, Patti and Gladys are also a part of her, Ledisi said she believes her musical and acting career would have been impossible without Simone.

“I want to stay loving those parts of me because if I don’t get to exercise them, they just go away,” she said. “But, this project and this journey with Nina has just changed my life. It allowed me the freedom I was looking for. After this, I don’t have to say, ‘Don’t put me in your box.’ The music will say it for you.”