Say the phrase “classical music” and many will imagine a renowned symphony orchestra playing masterpieces of the distant past at Carnegie Hall.

Last week, you could live that fantasy again and again at Carnegie, probably the most famous concert space in the world. The Vienna Philharmonic played towering works by Mozart, Beethoven, Brahms and Mahler over four programs. The Philadelphia Orchestra played Schubert’s Ninth Symphony. 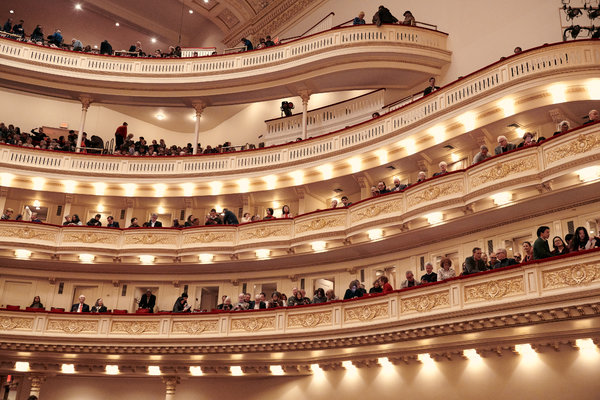 But music is about more than big symphonies, and it’s about more than the past. I went to nine concerts over seven days at Carnegie, a dizzying musical marathon, and it was a concentrated reminder that what is special about this art form is its variety — its intimacy and its grandeur, its capacity to draw inspiration from the past yet speak to the present.

How to foster new music, support emerging composers and connect classical music — that inadequate term — to today, while also maintaining the legacy of major ensembles performing the great works of the past? And how to preserve that legacy? Faithfully honor historical performance styles? Jolt timeless scores with new approaches?

Last week was just a random one at the hall, but it showed how Carnegie manages to engage all sides of these debates — the vast sprawl of the classical field in the 21st century — better than almost anywhere else.

The hall’s three spaces make this range of repertory and experience possible. Sleek and modern Zankel Hall, down in the basement, hosted the premiere of a powerful multimedia piece dealing with racial profiling and a prison system that inordinately targets young African-American men. Zankel was small enough for the Chiaroscuro Quartet’s period instruments and mellow gut strings to be heard in a lean, dusky-toned account of Schubert’s “Death and the Maiden.”

Snug, politely classic-looking Weill Recital Hall practically vibrated from the hip French harpsichordist Jean Rondeau’s concert, a walk on the wilder side of Bach and Scarlatti, while the master pianist Andras Schiff played Janacek and Schumann in the main auditorium. A single piano on that huge stage remains one of the most dramatic images in music.

The tension between innovation and tradition was on display during the Vienna Philharmonic’s first program, on March 2, when Adam Fischer led a robust, majestic account of Beethoven’s “Eroica” Symphony. As always, you could bask in this magnificent orchestra’s resplendent sound — the warmth and body of the strings, the reedy tang of the woodwinds, the dark richness of the brass. Even during intense passages, the transparency of the playing was marvelous.

Yet, for all its splendors, there was a slightly self-important quality to the performance that kept me a little distant, as if the orchestra was claiming ownership of a work from the glory days of Viennese classicism and showing an American audience how it’s played at home.

That the Vienna Philharmonic, so beholden to tradition, can discover Beethoven anew was triumphantly proved a few nights later, when the pianist Igor Levit was the soloist in the Third Piano Concerto, with Michael Tilson Thomas conducting. In Mr. Levit’s hands, a probing performance can seem excitingly dangerous. A telling example was the extended development section of the first movement. This episode, lasting a few minutes, is marked to be played softly. At first, the movement’s stern main theme is recalled by the piano — but mysteriously, quietly, in octaves. Then, supported by the orchestra, the piano elongates the theme and takes exploratory excursions into genial-sounding passages of spiraling triples.

But there was nothing genial about Mr. Levit’s approach. He played the whole episode not just softly, but as if whispered. Crucial notes were given just enough extra nudge to make them startling. The music-making was ruminative yet purposeful, unsettling yet assured.

The next evening, Mr. Thomas led Mahler’s 85-minute Ninth Symphony, a work given its premiere in 1912 by, yes, the Vienna Philharmonic. As a musician who revels in the stylistic melting pot that is American musical culture, Mr. Thomas embraced the deliberate mix of the sublime and the banal, the hints of church chorales and country dances that run though Mahler’s symphonies, especially the Rondo-Burleske movement of this one. Yet he also conveyed the elaborate structure of the score. Here was a performance that drew upon the orchestra’s great heritage while pushing it to take risks.

On Thursday, alas, I had to leave Mr. Rondeau’s recital early to make it to Mr. Schiff’s concert downstairs. Mr. Rondeau, with his long hair, scraggly beard and rumpled shirt, exuded wild-eyed charisma and channeled it into his performance. Dispatching Baroque passagework with impeccable clarity, even at breakneck tempos, he brought improvisational flair to his playing — he also plays jazz — especially an impetuous account of Bach’s Fantasia in C minor.

It was a different mood in the main auditorium, where Mr. Schiff, wearing a three-piece suit, looked every bit the distinguished master as he bowed to the audience. Once he began Janacek’s episodic suite “On the Overgrown Path,” he played with searching insight, rhapsodic freedom and uncompromising musical integrity.

But it was the raw, cry from the soul new work, “The Just and the Blind,” that has stayed with me from my marathon. Part of Carnegie’s 125 Commissions Project, begun in honor of the hall’s 125th birthday in 2016, it’s a 60-minute piece by the spoken-word poet Marc Bamuthi Joseph, with music by Daniel Bernard Roumain. Though it includes a dancer (Drew Dollaz), a vocalist (Somi) and projected animations and videos, the work is driven by Mr. Joseph’s stinging, brilliant words and is structured as a series of vignettes. Mr. Joseph voices the thoughts of a black father who admits to being afraid when, at night, he walks past young black men who look the same age as his son. Every day, he tells his son, the boy’s main mission in life is “to come home to me.”

Stretches of Mr. Roumain’s score, which he mostly plays on piano and violin, are alternately jazzy and modernist. A rhythmically frenetic section will segue into a breezily cool passage. But Mr. Roumain knows when to pull the music back so Mr. Joseph’s searing words can do their work.

Is this classical music? Perhaps not by traditional definitions. But it speaks to where Carnegie has come that it fit in at the hall just as well as the Vienna Philharmonic.