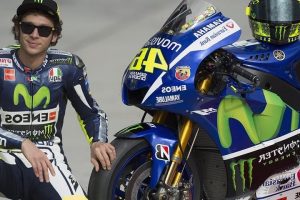 With a Grand Prix career spanning over 25 years, the 42-year-old is the only competitor in the World Championships’ history to win titles for all categories: 125cc, 250cc, 500cc and MotoGP. He’s also the only rider who has started in 400 or more races, out of which he obtained nine world titles, 115 wins and 235 podium finishes.

“I decided to stop at the end of the season so, unfortunately, this will be the last full season I’ll have as a MotoGP rider. It’s difficult. It’s a very sad moment because it’s difficult to know that next year that I will not race with motorcycles,” Rossi said during a press conference. “I do this for more or less 30 years, so next year my life will change. But anyway, it was great. I enjoyed it very much. It was a long journey – really, really fun- 25/26 years in the world championship is great.”

Fortunately for his diehard fans, Rossi will still participate in MotoGP in some capacity: he’ll be running his own VR46 Ducati team from next season onwards, so you’ll hopefully still get to see him around the track.