Home » Entertainment » No clearer on who should be our next prime minister? Tonight’s expectedly fiery TV debate may help

No clearer on who should be our next prime minister? Tonight’s expectedly fiery TV debate may help 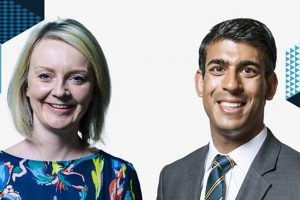 Following a week of uncertainty and political murmurings, tonight’s BBC News special will map out exactly what Conservative leadership candidates Liz Truss and Rishi Sunak are all about.

For many people right now, if you were to bring up the current state of UK politics, you would be met with either a shake of the head, a confused expression, a meme or perhaps all of the above.

One thing on our minds right now is who the next prime minister will be. Following Boris Johnson’s resignation announcement earlier this month, Conservative MPs have been voting to elect his successor ahead of the announcement of the winner on 5 September.

Tom Tugendhat, Jeremy Hunt, Nadhim Zahawi, Kemi Badenoch, Penny Mordaunt and Suella Braverman were all in the running to be the next PM, but after multiple rounds of voting and an ITV debate show, all have now been eliminated from the ballot.

Liz Truss will go head-to-head with Rishi Sunak in tonight’s Our Next Prime Minister debate on BBC One.

Now, former chancellor Rishi Sunak and foreign secretary Liz Truss remain as the two hopefuls to be the next leader of the Conservative party and the pair are going head-to-head in what is expected to be a heated TV debate tonight (Monday 25 July) on BBC One.

Our Next Prime Minister is usually the chance for viewers to get an opportunity to understand what these candidates stand for and are promising. While it’ll only serve as a snapshot of the policies, longstanding voting track records and morals of each candidate, it’s likely to make for an interesting watch. Not least because one of the two will end up becoming our next prime minister.

Rishi Sunak is in the running to for Conservative leadership and to be the UK’s next prime minister.

Conservative leadership election: will Rishi Sunak or Liz Truss become prime minister, and what are their policies?

Tonight’s televised special will be hosted by BBC newsreader and presenter Sophie Raworth, with analysis from BBC political editor Chris Mason and BBC economics editor Faisal Islam. It’s set to be broadcasted live from Stoke-On-Trent in front of a 100-person audience at 9pm. The 60-minute programme will also be simulcast on BBC Radio 5 Live, with coverage continuing after the debate and across BBC News Online and the BBC News Channel.

Jonathan Munro, interim director of BBC News and current affairs, says: “We’re delighted to be offering BBC audiences the chance to be part of this pivotal moment in politics and hear, first hand, from the final two candidates as they compete to succeed Boris Johnson as prime minister.”

The BBC will also invite the final two candidates to take part in a televised one-on-one interview with Nick Robinson in Our Next Prime Minister: The Interviews.

Boris Johnson has announced he will resign as prime minister, but what does that really mean for the UK?

This BBC debate comes a week after ITV aired its own version, Britain’s Next Prime Minister: The ITV Debate, on Sunday 17 July. The special episode took place on the eve of the next round of voting and saw Sunak, Mordaunt, Truss, Tugendhat and Badenoch debating the issues dominating the campaign. While each candidate had the opportunity to make a closing statement, the hour-long episode hosted by journalist Julie Etchingham was criticised by some viewers for being too short and didn’t allow viewers to get a true idea of what each candidate stood for.

In preparation for tonight’s debate, though, be sure to remind yourself of where Truss and Sunak each stand on key issues including abortion, LGBTQ+ rights and tackling male violence against women.

Our Next Prime Minister airs tonight on BBC One at 9pm and will be available to listen to simultaneously on BBC Radio 5 live, with the episode also available to stream on BBC iPlayer afterwards.