“This is who I am,” rapped Gloriel Villalobos, 26, known as Doma, standing in a circle with four other female rappers in Oaxaca, Mexico. A portable speaker blared an instrumental beat as the women took turns rapping.

This scene is replicated nearly every month in the main square by a tight-knit group of women who are rapping as a way to draw attention to issues like poverty, gender inequalities and disenfranchisement of indigenous communities.

“We used hip-hop as a way to speak about the injustices that we all faced growing up,” said Mare Advertencia Lirika, one of the best-known rappers in Oaxaca. She uses her music to call attention to the indigenous communities throughout Oaxaca who she says are historically disenfranchised from social services by the government. 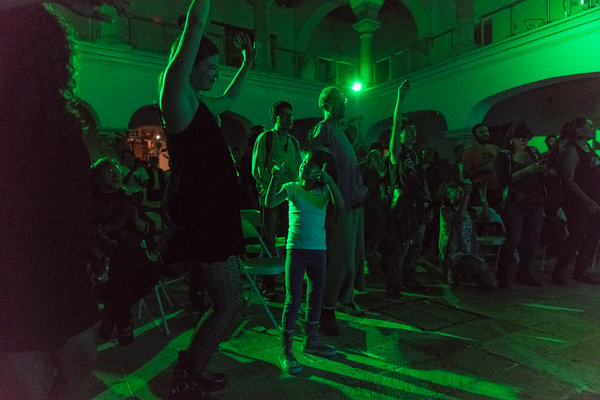 “The men can become aggressive with us,” said Leslie Reyes, the only female rapper on a local music label and studio known as Bear House Company, after a freestyle practice session days before the Zocalo performance. “Which doesn’t make us feel welcomed, so we create our own spaces like this.”

The Oaxacan rap scene has been dominated by men since it was first established in the early 1990s, influenced by United States rappers like Tupac Shakur, Ice Cube and a host of others. American hip-hop music eventually made its way to Oaxaca through the physical exchange of compact discs and cassettes from relatives who traveled to and from California, home to the largest Oaxacan population outside Mexico.

But as the American rap scene — both then and now — often incorporated hostility toward women, so, too, did the Oaxacan rap scene.

As online music platforms like Soundcloud and YouTube have become more accessible, the local hip-hop scene has grown.

And these women want a part in shaping the scene.

Mare Advertencia Lirika’s raps are an ode to the women who have influenced her. The rapper identifies as Zapotec, an indigenous community in Oaxaca and throughout California, and credits her mother, grandmother and great-grandmother, who have all had an enormous impact on her music and life.

While music and art has been a staple in the Oaxacan cultural tapestry for generations, the introduction of hip-hop when she was 12 years old gave her a voice, which eventually allowed her to question patriarchal systems of power and speak out against indigenous inequalities.

When she was 16, she began rapping as one of two women in a group of seven called Oaxside Connection. The name was inspired by the Los Angeles-based Westside Connection in the mid-1990s, composed of Ice Cube, Mack 10 and W.C. She later formed a female trio called Advertencia Lirika. Yet she still felt relatively disconnected from American rap because of the language barrier.

“I came from an entirely different context,” said Ms. Lirika, who grew up listening to banda, the Mexican brass-band music, and traditional Oaxacan music.

Once she was introduced to the sounds of Mexican rap groups like Black G and the Northsiders, she fully integrated herself into the Oaxacan rap scene. She has been the only Oaxacan rapper to have performed throughout the region and in the United States, South America and Europe. Her weekly travel schedule includes frequent shows and performances throughout Mexico. She now supports herself solely from her music.

“Most people still think that women aren’t compatible with rap and think that we are wasting our time,” she said while taking a break from recording a song at Bear House Company Oaxaca City. “We have to continue to show up at shows because it gives us confidence to see other women rap and to show people that we can also do this.”

When Cynthia Pombo records and practices in her room, her daughter, who is 4, tends to sit on the bed next to her, eagerly clinging on to every word that her mother recites.

“When my daughter was born, my life became very difficult because I was a teenage mother,” she said. “But she helps me write from the bottom of my heart because she is one of the best reasons to smile every day.”

She currently works at a photography studio and will be enrolling in medical school this fall. She was influenced by her older brother, who was part of a break dancing team in her neighborhood of Monte Alban, 15 minutes from the center of the city.

Ms. Pombo wrote poetry as a way to combat crippling depression. Her friends told her to convert her poetry into rap songs nearly a year ago. “Converting poetry into rap has helped bring me peace,” she said. She now goes by the stage name Eriz, inspired by the Greek goddess Eris.

She was 19 the first time she rapped at a party of a friend. There were almost 30 men and only two women in the room. She remembers hiding her face with her phone so that she could correctly recite the words. When she looked up she saw that no men in the room were paying attention to her performance.

“I knew at that moment that it wouldn’t be easy for me to be a rapper,” she said. “I had to find a way to be strong because that was how it was going to be for the rest of my career.”

While her older brother fully supported her decision to become a rapper, the rest of her family did not. “They thought rap only glorified drugs or and violence, which is how most people in Oaxaca tend to think,” Ms. Pombo said.

Her family eventually changed their minds when they realized that instead of violence, she was rapping about the struggle of being a single mother and about romance.

Using rap as a medium to address societal problems like patriarchy and machismo is important to Gloriel Villalobos. The social justice organizer hosts rap workshops throughout the state. According to Ms. Villalobos, conscious rap music pushes back against popular forms like narcocorridos, a genre of Mexican norteño music, that often glorifies violence and the mistreatment of women.

“It’s especially important for me to work with women who have no voice in their homes and in communities,” Ms. Villalobos said, referring to violence against women. As of last year, the state of Oaxaca was declared to be on “maximum alert” after what appeared to be the random killing of seven women in a span of a week. The threat continues to grow in other countries throughout Latin America according to a report released by Argentina’s Wanda Taddei Institute.

Today, Ms. Villalobos’s rap career has mainly grown by creating savvy campaigns through social media platforms like Instagram and Soundcloud, a site she uses often to promote her music. She is currently completing an album featuring the other women featured in this piece.

Since graduating from the local university with a degree in design, she has committed herself to rapping full time and, like her mentor and friend, Ms. Advertencia Lirika, she hopes to use her growing profile as a tool to push for change.

“It’s my way of pushing back against patriarchy? through rap because it feels like it’s the only way sometimes,” she said. “The work that I do in these communities is more important then fame or likes or making music videos.”

“When I’m rapping I am transported into another world,” said Yadira Cruz Garcia, a mother of two.

Ms. Cruz Garcia is the only woman in a rap group called Cascos Calle 7 and is also a part-time cook. She began singing at age 5 with her father, who played the guitar at a local Adventist church. But she only started rapping five years ago. Her family, who supported her performances in church, felt differently about her choice to rap because they thought rap only spoke about murder and violence.

Her lyrics, though, are more gentle: “I feel the air touching your body, that’s a motive and a new beginning, reviving all that has died between us, may your soul shine bright anew,” she raps in “Busca Colores.”

She hopes to help change her family’s views about rap and also thinks about how the music will affect her two young daughters. “It’s hard to attend events with my daughters so I have to be aware of what I rap about and make sure the songs don’t affect them in a negative way,” she said.

Earlier this year, Ms. Reyes was in a nearly fatal motorcycle accident, which left her hospitalized for 10 days and incapacitated for almost three months.

“The accident made me look at life differently,” she said. “Once I got out of the hospital, I began to write more and more.”

Today, Ms. Reyes is the only woman in Bear House Company, one of the most prominent co-ed groups in Oaxaca. In betweenworking at her parent’s neighborhood corner store, she spends her time recording songs with her group approximately five times a week.

“Rap has saved a lot of us, and we need people to know that,” she said.

An earlier version of this article misstated Yadira Cruz Garcia's given name. It is Yadira, not Yadhii.