Offbeat History, Off the Beaten Path

Like many famous and wealthy New Yorkers, the city’s most celebrated museums often have lesser-known, more approachable relatives. These kindred spirits do not reside on Fifth Avenue, but they will usually welcome you without delays or demands for exorbitant fees.

Out of the way, offbeat or small — and sometimes all three — these institutions may offer a more detailed or focused view of a period or an unusual collection. Here are six to explore. 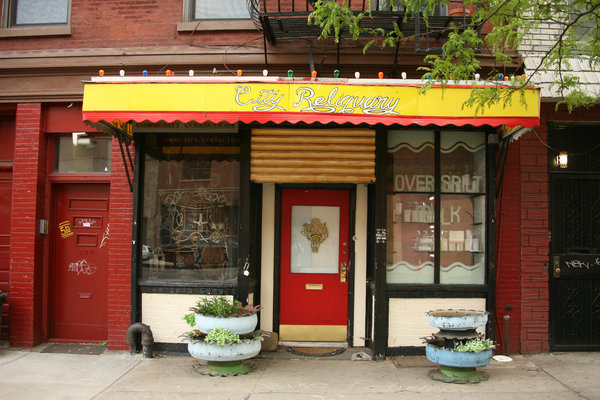 I never expected to be asked to donate objects to a museum — especially not two 1978 paper bus transfers that I mentioned finding in an old jacket.

Dave Herman, however, specializes in collecting what others throw away: subway tokens, signs, building bricks, seltzer bottles, door stops. He also has city “wildlife” — a rat skeleton and a taxidermied pigeon. Such bits of urban history make up City Reliquary, which Mr. Herman founded in 2002 in his apartment window and which now occupies a Williamsburg, Brooklyn, storefront. It is as quirky as the New York it celebrates.

“It was inspired by my appreciation of what I refer to as unsung landmarks,” Mr. Herman explained, “these places that have historic significance but are often overlooked.”

The museum, for instance, has reconstructed Petrella’s Point, a Chinatown newsstand named after its owner, Adam Petrella, now deceased, who used to decorate it with his artwork. It has also recently acquired the lobby directory of the St. Denis, an 1853 hotel turned into an office building, which developers plan to replace.

Mr. Herman has devoted his back room to “Making a Museum,” an unfolding exhibition about his operation. Its most striking object, lent by the author Sarah Murray, is a coffin in the shape of the Empire State Building that she commissioned from the Ghanaian artist Eric Kpakpo Adotey.

This is not a collection you would find at the New-York Historical Society. But, Mr. Herman said, “we are able to connect with people on a much more relatable level.”

American taverns offer food, drink and company. More than 200 years ago, however, some also helped cook up a revolution.

Fraunces Tavern was one of them. Now a museum devoted to Revolutionary America, this 1719 building still has a thriving restaurant.

“Samuel Fraunces pioneered some of the first takeout in New York,” said Jacqueline Masseo, the museum’s director, referring to the tavern’s colonial proprietor. “And he became George Washington’s steward.”

Washington memorabilia is scattered throughout the Lower Manhattan museum, including a lock of his hair, a fragment of a tooth and a shoe worn by Martha Washington that she gave away as a gift. Ms. Masseo compared that gesture to a rock star’s throwing drumsticks into an enthusiastic crowd. In America, the couple “were the first celebrities,” she said.

But the space that most evokes Washington is the Long Room, where he bade a tearful farewell to his officers on Dec. 4, 1783. (The museum re-enacts the event annually.) A new railing has been installed there with a button visitors can press to hear his speech.

The museum also honors less famous patriots, including women. Two paintings illustrate the exploits of Mary Ludwig Hayes, a.k.a. Molly Pitcher, who carried water for the troops at the Battle of Monmouth in 1778 and took over firing a cannon after she saw its gunner — her husband — fall. And one current exhibition, “Confidential: The American Revolution’s Agents of Espionage,” celebrates many ordinary people who spied for the cause.

Some of them undoubtedly drank here.

This is another building that famously enticed George Washington. And it also lured Lin-Manuel Miranda.

The mansion, Manhattan’s oldest, was built in 1765 by Roger Morris, a Tory who fled after the Revolution started. Because the residence offered panoramic city views, Washington briefly commandeered it as his military headquarters in 1776. An informal parlor, labeled Washington’s War Room, is done in 18th-century style. Most of the furnishings, however, reflect the French Empire tastes of a wealthy later occupant, the imperious Eliza Jumel (1775-1865), who married Aaron Burr in 1833.

“She was a force to be reckoned with,” said James W. Tottis, a consultant to the museum. But though she filed for divorce in less than a year, Morris-Jumel still has a room with a desk and other pieces of Burr’s. And that’s how Mr. Miranda, creator of “Hamilton,” enters the story.

“He sat in that chair and wrote at least two of the songs,” said Mr. Tottis, pointing to an unassuming reproduction piece with a striped slipcover. Mr. Miranda even tweeted a photo of himself sitting in the chair.

Famous associations, though, are not the only way the Morris-Jumel draws visitors. It offers tours, family days, plays and art shows and, at least once a month, paranormal investigations.

“There is some thought that Eliza is here,” Mr. Tottis said. And Burr? He laughed. “We don’t think that Eliza would let him come back.”

It even has a raven.

Unfortunately, the bird is not alive — stuffed, it occupies a glass cabinet — but it does add atmosphere to this tiny early 19th-century dwelling, which Poe rented during his final years. Perched on a small swath of greenery (Poe Park) in the Bronx, it looks as if it had dropped from the sky like Dorothy’s Kansas farmhouse.

“It gives us a glimpse of where the common person lived,” said Vivian E. Davis, the museum’s education coordinator. Not that Poe was common, but he was poor. “It’s good for people to see the human side of him,” she added. “He was trying to make a living like everyone else.”

Poe moved to this formerly rural spot in 1846 with his young wife, Virginia; his mother-in-law, Maria Clemm; and their cat, Catterina. Poe hoped the country air would cure his wife’s tuberculosis, but she survived only six more months. A small first-floor chamber has the bed where she died. That macabre furnishing, a framed mirror and a rocking chair are the museum’s only pieces that actually belonged to Poe, Ms. Davis said, but memorabilia on the walls reveals his life, as do an audio tour and a video. The works he wrote here include “Annabel Lee” and “The Bells” (but not “The Raven”).

The place is eerie but “not haunted,” Ms. Davis said. Still, while upstairs, I felt the presence of someone behind me. It was Poe, all right — in the form of a life-size cutout.

I recently got acquainted with several friendly city residents I wouldn’t have anticipated encountering off a Queens parkway: eight goats and two alpacas.

Along with six sheep, two steers, 150 hens and 14 hives’ worth of honeybees (two visiting pigs are soon to arrive), they live at the Queens County Farm Museum, which, though far from small — 47 acres — is certainly extraordinary.

It is “the longest continually farmed site in New York State,” said Jennifer Walden Weprin, the museum’s executive director. “Your assumption would be that it’s somewhere else, not in New York City.”

The property, which dates to 1697, has a historic 1772 farmhouse and a detached 1797 summer kitchen. (Other buildings are from later years.) A sustainable working farm, the site sells its eggs, produce, honey and wool on the premises while also serving as an educational campus. Young visitors can feed animals, harvest in a children’s garden, learn about composting and practice science and math skills. And gain a little insight: “Peas are awful good when they’re freshly picked,” Ms. Walden Weprin said.

She plans to expand that teaching mission by turning the Summer Kitchen into a reading room — a cozy refuge in winter — and is raising funds for a $25 million education center. In the meantime, the museum offers spring hayrides and festivals, an Earth Day program and a chance to really lose yourself here in the fall: It builds a very popular corn maze.

The most resonant and wrenching object here is a bill of sale. Yellowed with age, it is no ordinary retail receipt.

“This is for a 13-year-old girl named Nan who was sold right here on Staten Island,” said Sylvia Moody D’Alessandro, executive director of the Sandy Ground Historical Society.

On the island’s southwest tip, Sandy Ground earned its name from its gritty, infertile soil. But the site is rich in African-American history. Some of the museum’s pieces, like that 1812 bill of sale, document slavery. But most commemorate the area’s triumphant past as one of the oldest continuously inhabited free black communities in the country, settled not long after New York State abolished slavery in 1827.

“We didn’t want this history, like so much of African-American history, to get lost,” said Mrs. D’Alessandro, herself a Sandy Ground descendant.

The society, established in 1979, maintains its museum in an unassuming house filled with African masks, exhibits on past community residents and “Binding Ancestry: The Heritage & Artistry of Handmade Quilts,” an exhibition to which Mrs. D’Alessandro and other local artists have contributed. The quilts’ motifs include the oyster industry (it drew many free black workers), family trees and the historic local 1850 Rossville A.M.E. Zion Church.

She said she tells them, “The person on your doorknob helped open the door for somebody else to get freedom.”