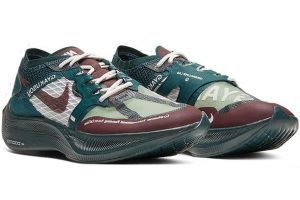 In true UNDERCOVER fashion, the shoes comes slightly altered in terms of its upper build and heavy text branding takes center stage. Extra overlays are added onto the lateral and medial walls, the latter of which is adorned with an UNDERCOVER LAB spell out. The first colorway on the roster is primarily covered in a forest green hue, and comes placed next to hits of burgundy which cascade over the throat, Swooshes and forefoot. White accents are distributed to the thicker mesh quarter panels as well as the “Gyakusou” embellishments on the sides and “Gyakusou International Running Association” notation on the forefoot. Zoom-loaded midsoles are wrapped with more green skins.

The second pair leans into a much brighter palette as a bold red tone engulfs a majority of the upper and the midsoles. Like its sibling, the text furnishings, laces and the mesh mid-foot panel are drenched in a crisp white, but its tongues and forefoot panels deviate with a navy hue.

A release date hasn’t been confirmed by Nike yet, but it’s likely that these could see a drop in the coming months.