With both her parents serving short prison sentences for their roles in the high-profile college admissions scam, Lori Loughlin and Mossimo Giannulli’s daughter Olivia Jade is breaking her silence.

The 21-year-old beauty influencer spoke for the first time on Tuesday’s episode of “Red Table Talk,” repeatedly apologizing for her involvement in the bribery scandal, which she said led her to have a “completely different outlook” on her upbringing and privilege.

“I think that what hasn’t been super-public is that there is no justifying or excusing what happened,” Jade told co-hosts Jada Pinkett Smith, her daughter Willow Smith and mother Adrienne Banfield-Norris. “What happened was wrong and I think every single person in my family can be like, ‘That was messed up. That was a big mistake.’”

“But what I think was so important to me is to learn from the mistake and not to now be shamed and punished and never be given a second chance,” she added. “Because I’m 21, I feel like I deserve a second chance to redeem myself, to show I’ve grown.”

Jade said that she understands the backlash she’s received since charges in the nationwide scandal were announced in March 2019 and she became the “poster child” for white privilege.

“I’m not trying to victimize myself. I don’t want pity. I don’t deserve pity. We messed up,” Jade explained. “I recognize that I messed up and for so long I wasn’t able to talk abut this because of the legalities behind it.”

“I never got to say that I’m really sorry that this happened or I really own that this was a big mess up on everybody’s part,” she continued. “I think everybody feels that way in my family right now.”

Loughlin and Giannulli pleaded guilty to charges of conspiracy to commit wire fraud and mail fraud for paying $500,000 in bribes to fixer Rick Singer to secure admission for both their daughters at University of Southern California as rowing recruits, even though the two never participated in the sport.

Jade claimed she was “not fully aware of what was going on,” and didn’t address how deeply she was involved in the scam.

Court documents released in August showed she discussed with her parents how to conceal the scheme from her guidance counselor. Jade also was allegedly copied on several emails about the plans and posed for staged photos on a rowing machine to bolster her resume as a competitive rower. 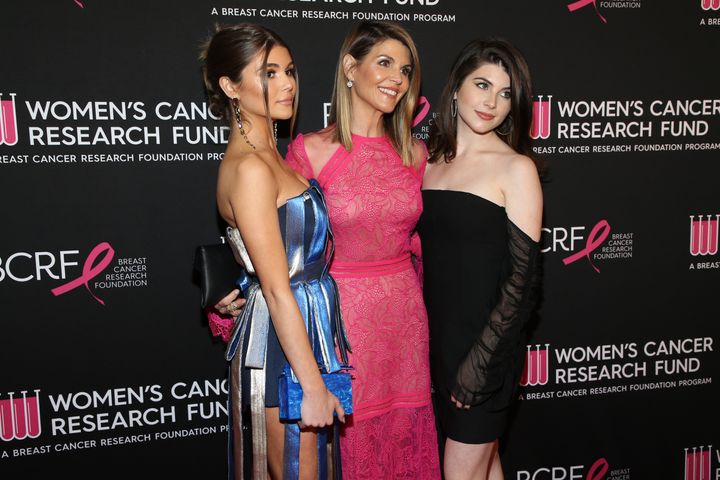 Loughlin is serving a sentence of two months, and Giannulli is imprisoned for five months. Jade said she hasn’t been in contact due to a “quarantine phase.”

“I know she’s strong and it’s a good reflection period,” Jade said of her mother. “She gets to really rethink everything that happened. Kind of figure out, when she comes out, what she wants to do with that she’s learned through all of this. And I think that hopefully will be a blessing in the end.”

Jade said she initially was not angry with her parents, but her reaction changed drastically.

“I remember thinking, ‘How are people mad about this?’ I know that sounds so silly, but in the bubble that I grew up in I didn’t know so much outside of it,” she said. “It’s not fair. It’s not right, but it’s happening.”

Pinkett Smith and her co-hosts repeatedly pressed Jade on her ignorance to her own privilege, with Banfield-Norris admitting that she struggles to “feel compassionate” for someone in Jade’s position.

“There’s so much inequality and inequity that when you come to the table with something like this is like, ‘Child please!’ I’m exhausted with everything we have to deal with as a community and I just don’t have the energy to put into the fact that you lost your endorsements … because at the end of the day you’re gonna be OK,” Banfield-Norris said.

Jade seemed to take the criticism in stride, reiterating that she’s trying to better herself from the ordeal.

“I didn’t come on here to try and win people over and say, ‘Oh I really need people to like me,’” she said. “I just want to apologize for contributing to these social inequalities without maybe not ― even though I didn’t realize it at the time. Like, being able to come here and recognize that, I am aware. You know?”

END_OF_DOCUMENT_TOKEN_TO_BE_REPLACED

END_OF_DOCUMENT_TOKEN_TO_BE_REPLACED
We and our partners use cookies on this site to improve our service, perform analytics, personalize advertising, measure advertising performance, and remember website preferences.Ok