On 6ix9ine’s ‘Dummy Boy,’ a Rap Outlaw Learns to Compromise

An opportunist who parlayed a sort of social-media telegenic glow into a music career, a curio who embraced a quixotic anti-style and became a regular fixture on the Billboard charts, 6ix9ine has become one of the emblematic rappers of the SoundCloud generation, even if rapping itself isn’t of much interest to him.

He is a snoozy lyricist, almost wholly uninterested in narrative, complexity or even the basic tenets of rhyme. Instead, he emphasizes texture and intensity — typically, he’s screaming in a static-y rasp, an approach that suggests abandon, and potential mayhem just around the corner.

But as much as he is a musician, he is an actor, with a carefully cultivated online personality designed for maximum shock. And as much as he is an actor, he is facing real-world consequences for real-world actions: He pleaded guilty to a 2015 charge of use of a child in a sexual performance, for which he recently received four years probation. And earlier this month he was arrested on federal racketeering and weapons charges, among others. (6ix9ine, 22, pleaded not guilty on Monday.) His trial is scheduled to begin in September 2019; he remains in custody today.

Amid this chaos, his second album, “Dummy Boy,” was officially released Tuesday. (It leaked online a couple of days prior.) It feels less like a blueprint for 6ix9ine’s future in music and more like a retrospective of an especially bizarre time in hip-hop.

“Dummy Boy” presents a rapper who always sounds as if he is getting away with something. It starts at the album cover, which features a cartoonish illustration of 6ix9ine grinning as he expels rainbow-colored urine onto the floor. And it extends to the songs, many of them previously released, which show a fluid artist less interested in cementing his most provocative choices — recovering the raw tension of peak-era DMX or M.O.P. — than in bending to the moment. 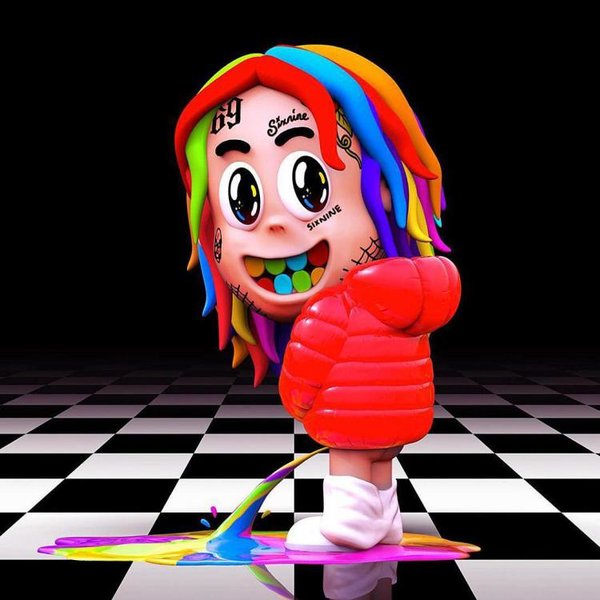 That makes the energetic but scattered “Dummy Boy” far less rowdy than his first full-length release, “Day69,” which was filled with short, punchy scraps of songs that defied many rap conventions.

If heavily AutoTuned vocals are what the moment requires, as on “Tic Toc” and “Feefa,” then he’ll do that. If whisper rapping with Nicki Minaj will grab people’s attention, as he does on “Fefe,” then he’ll do that. If sing-rapping in Spanish is expedient — as on “Bebe” and “Mala,” a pair of duets with Anuel AA — then he’ll do that, too. He still shrieks — there are some Busta Rhymes-isms on “Waka,” and “Tati” is full of clipped threats — but his penchant for pandemonium is largely expressed in his preference for peculiar and irregular sounds: the pealing siren on “Stoopid,” or the quasi-steel drum on “Kika.” (The producers are an eclectic bunch, including Murda Beatz, Scott Storch and Take A Daytrip.)

6ix9ine also appears to understand that a little 6ix9ine goes a long way; often he sounds like an accent piece on his own album. “Feefa” feels like a Gunna song that happens to feature 6ix9ine; “Waka” feels like an A Boogie Wit Da Hoodie song that happens to feature 6ix9ine. The exception, surprisingly, is “Kanga,” which features a happy-to-play-second-fiddle Kanye West.

What may end up being the lasting impression of this album, however, is the strain of anxiety that runs through it about the affiliations 6ix9ine made with the Nine Trey Gangsta Bloods. Last month, when a judge sentenced him to probation, he was barred from publicly affiliating with the gang, whose members had become key figures on the rapper’s team. Their relationship deteriorated further after a shooting at a Manhattan restaurant, and 6ix9ine renounced them in a radio interview. Before 6ix9ine’s arrest, the F.B.I. warned him that he was being targeted by his former associates; now he is being charged alongside Kifano Jordan, known as Shotti (or Shottie), a Blood who had helped manage his career since 2016.

On “Kika” and “Kanga,” other people performatively interrupt 6ix9ine, preventing him from mentioning the gang’s name. This may be out of concern for how it might affect his legal situation, or it might represent legitimate frustration at the tensions that tore apart him and his crew.

On “Feefa,” he laments old friends that once “was my bros, but they changed though.” At the song’s end, in one of his calmest moments, he raps, “I’m stressing/Mama saying, ‘Don’t cry, count your blessings.’”

Or maybe this, too, is a performance, a convenient show of regret from an artist who thrives by molding himself to the moment.