Home » Entertainment » Orphan fans, the petrifying trailer for the horror prequel is here to haunt your dreams

Orphan fans, the petrifying trailer for the horror prequel is here to haunt your dreams 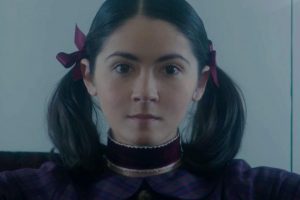 When it comes to a really great horror film, everyone knows that blood and gore aren’t the only means of giving you the spooks. Sometimes, you need a deeply disturbing plot twist – one so creepy that you still marvel (and shiver) at it years down the line.

2009 horror film Orphan is one chiller that definitely got under our skin. Starring Vera Farmiga and Peter Sarsgaard, the film tells the story of a couple who decide to adopt a 9-year-old Russian girl named Esther from an orphanage after the stillbirth of their third child. After some sinister goings-on, though, it transpires that Esther is actually named Leena Klammer (Isabelle Fuhrman). More importantly, she’s not a child, but a 33-year-old woman born with hypopituitarism, a hormonal disorder that allows her to pose as a girl and get away with murder – literally.

From The Black Phone to The Invitation, these are the 10 new horror TV shows and films we’re excited about

Although Orphan flew under the radar at the time of the film’s release, it’s now become a cult favourite in the horror canon. But Esther’s reign of terror is far from over and, after a long wait, the upcoming prequel Orphan: First Kill is about to land on the big screen.

That’s right, folks: the new film, which is released in cinemas and on Paramount+ next month, jumps back in time to tell Esther’s origin story as we discover just how the young woman honed her murderous tendencies.

“Esther’s terrifying saga continues in this thrilling prequel to the original and shocking horror hit Orphan,” reads the official synopsis.

“After orchestrating a brilliant escape from an Estonian psychiatric facility, Esther travels to America by impersonating the missing daughter of a wealthy family. Yet, an unexpected twist arises that pits her against a mother who will protect her family from the murderous ‘child’ at any cost.”

Rather excitingly, the new film sees Isabelle Fuhrman reprise her role as the violently psychotic orphan, alongside the always-excellent Julia Stiles as her mother, Tricia Albright, and Rossif Sutherland as her husband, Allen Albright.

By the looks of the brand new trailer, Esther’s thirst for killing is still going strong as a poignant family reunion gives way to chaos, violence and bloodshed. And, just like in the original film, there’s a battle between the murderous “child” who supposedly went missing and a mother hellbent on defending her family against evil.

The question is, which unfortunate victim is Esther’s first kill?

Orphan: First Kill arrives in cinemas and Paramount+ on 19 August