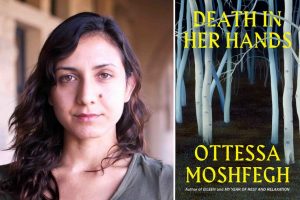 Vesta Gul, 72, is walking her dog in the woods when she finds a handwritten note on the ground.

“Her name was Magda. Nobody will ever know who killed her. It wasn’t me. Here is her dead body.”

Gul (pronounced “gull”, like the bird) is recently widowed and new to the sleepy town of Levant in the United States. She picks up the note, and quickly becomes obsessed with Magda and the mystery of her death.

The narrator is a septuagenarian, but in her voice are echoes of Moshfegh’s other characters – such as the world-weary graduate of My Year Of Rest And Relaxation (2018) and the glum prison secretary of Eileen (2015), which was nominated for the Man Booker prize.

Moshfegh’s latest novel is less provocative than her earlier ones. Yet there is something oddly compelling about its exploration of loss and loneliness.

Vesta swaddles herself in the comforts of the imagination, making for an unreliable narrator whose mind is a Swiss cheese-like landscape where reality and fantasy are often confused.

She even invents a backstory for the deceased heroine. Magda, she fancies, must have been a Belarusian who worked as a fast-food worker and home aide in America.

The narrator goes on to populate the story with love interests for Magda and other characters who seem to have been drawn, in the manner of free association, from real life.

One of the most delightful things about Moshfegh is her wicked humour, though there are moments when the narrator indulges a bit too happily in her own meanness. Vesta, sketching Magda’s personality, at one point imagines the young woman urinating into a bucket and dipping someone’s toothbrush in it.

“A flake of excrement nestled between the bristles. Ha ha! I nearly laughed, picturing the kind of silly revenge she might think up. That was pretty wretched. Where did she get that attitude? Perhaps she’d had a father who liked to make nasty jokes.”

DEATH IN HER HANDS

But at its best, the novel treads the fine line between savagery and vulnerability, and does a good job at exploring how one can love someone but also resent them.

There is no grand denouement. As it turns out, Vesta is not so much solving a murder as plotting one. “How do you murder the dead?” is the real question that drives Death In Her Hands towards its cathartic, bewildering conclusion.

If you like this, read: My Year Of Rest And Relaxation ($18.73, Penguin, 2018, available at bit.ly/MyYearRR_OM), Moshfegh’s novel about a graduate who escapes from reality through drug-induced sleep.