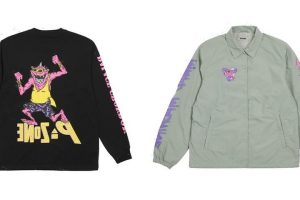 Active from the mid-1980s to the 1990s, M-ZONE — which was originally a BMX store called Mud Machine — became one of the go-to stockists for skateboarding gear in London. Renamed M-ZONE in the late ’80s, the Croydon-based store later opened a store in the city’s West End and became a hub for young skaters, including the likes of Curtis McCann and Mike Manzoori.

Now paying homage to this important part of London’s skateboarding scene, Palace has linked up with the original owner Charles Burrows to rework some of M-ZONE’s most renowned graphic across a selection of coach jackets, T-Shirts, hoodies and sweatshirts, as well as a limited-edition deck.

The full Palace x M-ZONE collaboration will be available both in-store and online starting from May 14, 11 a.m. GMT on the brand’s official webstore, and in Japan on May 15, 11 a.m. JST on the Palace Japan webstore, and on the official “Palace_Skateboards” WeChat store the same day, 11 a.m. CST.