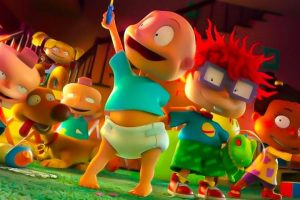 Paramount+ has been on a roll with its latest throwback reboots and continues the momentum as they debut a trailer for a reimagined Rugrat cartoon series.

The classic baby group cartoon ran for a total of nine seasons from 1991 to 2004 on Nickelodeon followed by a production of three movies and the sequel series All Grown Up.

In promotion of the series, the trailer follows the babies on a rollercoaster of adventures as they run from a dinosaur in the jungle, brawl with a giant green dog monster in a reality-shifting video game, and break into the “magical cave of fun stuff”.

Check out the trailer below to hear Tommy Pickles say his infamous line, “A baby’s gotta do what a baby’s gotta do.” The three-dimensional cartoon reboot premiers on May 27.