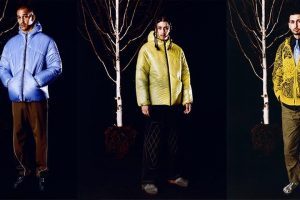 Posing questions around autonomy, individualism and collectivism in human nature, the collection arrives with an accompanying video shot by London creative studio Crown & Owls entitled “Country of the Blind”. Based on a social dancing experiment from Canadian choreographer and artist Noemie Lafrance, Farzaneh invited 25 people in a space without knowledge they were taking part in an experiment.

Under the rules of: improvise moving to the music and find a dance you like, when you have found your dance moves loop them, when you see someone doing a dance you think is better than yours to copy it and when everyone is doing the same dance the experiment will be over, “Country of the Blind” is the filmed result of said experiment.

You can view the full “Country of the Blind” video below — including all womenswear — and keep up-to-date with Paria Farzaneh here.

In other news, legal filings have confirmed what the official YEEZY Gap logo looks like.