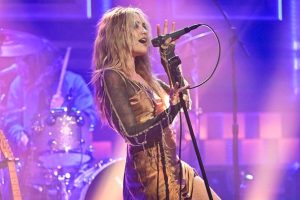 Paris Jackson was a commanding presence in her latest late-night appearance. The 24-year-old singer and model performed her new single “Lighthouse” on “The Tonight Show Starring Jimmy Fallon” on June 21, and the grunge-rock song is a reverberant departure from the quieter sound of her debut studio album, “Wilted,” in 2020. “So this happened,” Jackson wrote on Instagram following the taping.

Jackson has been pretty explicit about the single’s grunge influence. The “Lighthouse” music video borrows inspiration from Nirvana’s “Silver,” and a photo of Kurt Cobain is at one point shown on a bulletin board in the background. On her new sonic chapter, Jackson told NME, “A lot of the new songs coming out are similar stories about the same person and heartbreak. I guess I’m just exploring different feelings. ‘Wilted’ was a more melancholy record, and now I’m exploring more of the anger.”

Though she grew up surrounded by music — her father being Michael Jackson — it was only recently that Jackson started publicly sharing her talents. “It wasn’t until the last couple years where I started calling myself a musician and embracing the feeling that I think I was born to do this,” she said on “Good Morning America” in 2020. “I originally started writing for myself just to get things out, to purge. It just feels good to share it. It feels not like butterflies in your stomach, but in your heart.”