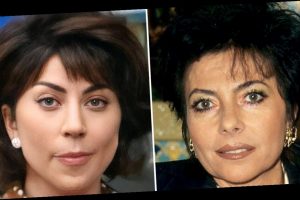 Patrizia Reggiani has a million reasons why she is not thrilled about Lady Gaga portraying her in the upcoming movie House of Gucci.

Actors Who Portrayed Real People in Movies and TV Shows

“I am rather annoyed at the fact that Lady Gaga is playing me in the new Ridley Scott film without having had the consideration and sensibility to come and meet me,” the disgraced Italian socialite, 72, told Agenzia Nazionale Stampa Associata on Thursday, March 11.

“It is not an economic question. I won’t get a cent from the film,” Reggiani explained. “It is a question of good sense and respect.”

House of Gucci began filming in Rome in February. It is based on Sara Gay Forden’s 2001 book, The House of Gucci: A Sensational Story of Murder, Madness, Glamour, and Greed.

Most Infamous Family Murders in History

In the film, which is set to be released on November 24, Gaga stars as Reggiani, who infamously hired a hitman to kill her ex-husband, Maurizio Gucci, in March 1995. Adam Driver plays the late fashion mogul, while Al Pacino portrays Maurizio’s uncle Aldo Gucci. Jared Leto and Jeremy Irons also play members of the family.

Reggiani married Maurizio in 1973, and they had two daughters: Allegra and Alessandra. The businessman left his wife for a younger woman in 1985, telling her that he was going on a business trip but never returning home. They finalized their divorce in 1991, and Reggiani was diagnosed with a brain tumor the following year. Although she successfully had the tumor removed shortly after, she claimed it had altered her thought process and ultimately led her to have her ex-husband assassinated on the steps outside his office.

Reggiani was arrested in 1997, and a high-profile trial ensued. She was convicted in 1998 of arranging Maurizio’s murder and sentenced to 29 years in prison, which an appeals court later reduced to 26 years.

Lady Gaga Through the Years

The Italy native’s sentence was cut even shorter in 2016, when she was released for good behavior after 18 years behind bars. Following her release, she was awarded an annuity of £900,000 from Maurizio’s estate per an agreement that they had signed in 1993. She was also back-paid more than £16 million for her time in prison, a decision that the former couple’s daughters, Allegra and Alessandra, have indicted they plan to appeal.

Gaga, 34, shared the first photo from the House of Gucci set via Instagram on Tuesday, March 9, showing her and Driver, 37, in skiwear. “Signore e Signora Gucci,” the pop star captioned the viral post.