Home » Entertainment » Paul Dano’s Cup Runneth Over (And Over)

Paul Dano’s Cup Runneth Over (And Over)

To the scabrous pile of breakdowns, shutdowns and scandals that will memorialize 2018, a humble submission: Paul Dano, acclaimed 34-year-old actor, did not appear in a single movie.

Granted, this might seem a minor point in the grand scheme. But consider this: To find another 12-month span in which discerning moviegoers were deprived of even one Paul Dano performance — in more generous times, there were as many as four — you have to go all the way back to 2003, a year when (coincidentally!) Bennifer, Saddam Hussein and the Chingy song “Right Thurr” were on top of the world.

To be fair, Mr. Dano didn’t plan things to work out this way. Far from it! He loves movies and they love him right back. For the past decade-and-a-half, he’s been a constant, animating (if not always showy) presence in a run of good and strange films, many involving a winning bingo card of the great contemporary directors: Paul Thomas Anderson, Steve McQueen, Ang Lee, Spike Jonze, Denis Villeneuve.

That it’s not Mr. Dano’s face — a cherubic, inverted teardrop — that first comes to mind when you think of these movies (“There Will Be Blood,” “12 Years a Slave,” “Prisoners”) is a testament to his most durable gift. Filmmakers and audience members alike believe he is one of them.

And now he really is a filmmaker, with the release last fall of “Wildlife,” Mr. Dano’s meticulous and evocative directorial debut, adapted from the 1990 Richard Ford novel and starring his old friends Carey Mulligan and Jake Gyllenhaal. That’s why the actor failed to visit you at the multiplex last year — he was busy realizing a lifelong dream.

But that’s not all. Hunkering in the editing bay of “Wildlife,” he missed the physicality of performance. So he accepted an offer — and put on 20 lbs. of muscle — to play a tenacious, convicted murderer who tunnels his way out of prison in the seven-episode Showtime limited series “Escape at Dannemora” with Benicio Del Toro.

And there’s more! Really, Mr. Dano has never been so busy. “Dannemora” shot for a grueling six months in upstate New York. During that time, another old friend and neighbor, Ethan Hawke, sent him an effusive text about collaborating on a revival of the venerated Sam Shepard play “True West.” Mr. Dano just couldn’t resist — his cup ranneth over. And so he closed out the year in yet a third medium, starring opposite Mr. Hawke in the Roundabout Theater Company’s Broadway production, which began previews Dec. 27 and opens Jan. 24.

Twelve months, no movies and an embarrassment of riches. And none of his professional accomplishments compare to his most personal one, the one that inspired Mr. Hawke to observe in a phone interview that his friend was “truly becoming himself”: Paul Dano became a dad. 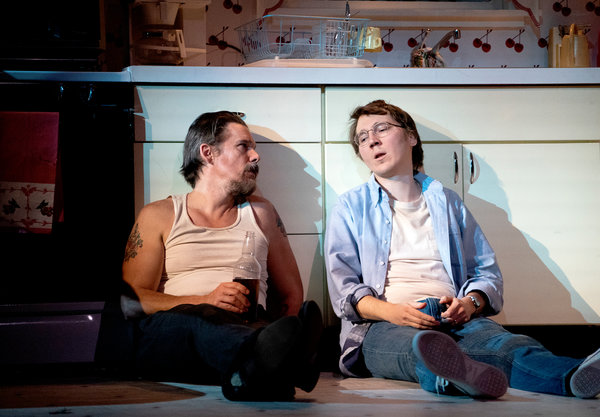 Early on a December morning in the Boerum Hill neighborhood of Brooklyn, where Mr. Dano and his partner, the actress and writer Zoe Kazan, have lived for nearly a decade, I met him at a handsome restaurant with dark wood paneling and an antique bar.

He was getting over a cold and had a four-month-old at home — he and Ms. Kazan, with whom he co-wrote “Wildlife,” welcomed Alma in August. But he was warm and genial, brightening as he began to report on his fledgling days of fatherhood.

“I didn’t think I would like it so much; I mean, I thought I would like it, but it’s really quite astonishing,” he said. In a crisp, black-and-blue flannel, a nest of light-brown hair and olive librarian glasses he could have passed as an adjunct at the Iowa Writers’ Workshop. “There’s just a sort of … I don’t know, a hope or something. Seeing something so innocent and pure and unsullied by the world.”

Mr. Dano, who has self-diagnosed “dorky impulses” and relishes researching a role, spent that last movie-less year, in 2003, as a New School freshman studying English and Russian literature. To portray the Beach Boys frontman Brian Wilson in 2015’s “Love & Mercy” he learned to play piano. But now he’s found the ultimate research project.

“There’s something about being there for the first moments, the fragility, which really begins at conception,” he continued. “And the heart has this chemical reaction on the first breath — the chambers change, because you’ve switched from breathing amniotic fluid to oxygen. And then that breath just keeps going, and going, and it doesn’t stop until we … It’s just mind-blowing stuff.”

He was born in Manhattan to a father who was a financial adviser and a mother who raised him and his younger sister (a half brother is 16 years older). Mr. Dano was acting in school plays and community theater as far back as he can remember, “a summer activity that ended up gathering steam,” and by the time he was 12 he was performing on Broadway, with George C. Scott, in the 1996 production of “Inherit the Wind.”

At 16, he starred in his first feature film (and won an Independent Spirit Award) as a reckless, libidinous teenager coping with his mother’s death in the Long Island-based indie “L.I.E.”

Mr. Dano’s family wasn’t especially arts-oriented. (“They don’t even like good music,” he confessed). But his parents did everything they could to support his dream. With Alma, whose primary talents to date include smiling and using her hands, he can pay it forward.

“We were talking last night about how everything the baby does — even if it pukes everywhere — you say, ‘Good job!’” Mr. Dano gushed. He was already nostalgic. “One day that’s going to stop, you know? One day not everything is going to be good.”

Out of nowhere, two tables down from us, a man with a puppy-dog grin and a riot of straw-colored hair turned toward Mr. Dano and asked about Ms. Kazan and the baby. It was the comedian and writer Mike Birbiglia, another neighbor of the actor’s, who was in the midst of his own Broadway run.

Mr. Dano asked Mr. Birbiglia how his show was going.

“It’s fun,” he answered, unconvincingly. A moment later, he amended: “It’s so, so exhausting.”

On the 10th floor of a Times Square office building, two weeks before previews for “True West” were to begin, Mr. Dano and Mr. Hawke were running lines in a makeshift, fluorescent-lit rehearsal space.

Mr. Dano appears in every minute of the two-hour play, and was already feeling it: “It’s the greatest challenge I’ve ever had as an adult actor on stage,” he said.

The story follows two distant brothers with dreams of making a fortune in Hollywood who forge a tempestuous screenwriting partnership. Its solitary setting, their mother’s tchotchke-filled Southern California bungalow, deteriorates along with the brothers’ psychological mooring, and the rehearsal set looked as if it had been turned upside down and shaken for loose change.

The older brother in the play, Lee, played by Mr. Hawke, is a feral and felonious hustler, the antithesis of Mr. Dano’s younger, starch-collared Austin. The actors were well matched to their parts. In rehearsal, Mr. Hawke was a bee in a meadow, pacing excitedly, pogoing from one scene interpretation to the next. Mr. Dano, who seemed almost too tall to fit into the fake kitchen, was comparatively dispassionate, soft-spoken.

“One is more outward, the other is more inward, so you get this great, catalytic energy between them,” said James Macdonald, the play’s director. “They’re great dance partners.”

“True West,” first produced in 1980, has made memorable brotherhoods of Tommy Lee Jones and Peter Boyle, Gary Sinise and John Malkovich, Philip Seymour Hoffman and John C. Reilly, among others. (Kit Harington and Johnny Flynn are paired up in London right now, too.) It hinges on a comic reversal, and by the end of nine scenes, it’s Austin’s animal instincts that prove the most vicious.

The character’s turn from meek to maniacal is classic Dano. In his two most famous roles, as a conniving preacher in “There Will Be Blood,” and as an electively mute goth in “Little Miss Sunshine,” he plays diligent, abstemious men whose tight lids obscure bubbling waters.

Mr. Macdonald, whom Shepard personally recruited to revive “True West” before his death in 2017, said it was the actor’s whiplash-inducing emotional range that won him the job.

Mr. Hawke, who directed his current scene partner in a 2007 Off Broadway production of “Things We Want” (Mr. Dano and Ms. Kazan, then co-stars on stage only, were reportedly “kissing in the broom closet”), observed someone who “can be both explosive and intellectual, which is a rare combination.”

Ben Stiller, the director and executive producer of “Escape at Dannemora,” told me, unprompted, that the actor had been keen to play “a guy who is at odds with himself.”

Mr. Dano has heard these appraisals before.

“It’s not conscious,” he insisted, back at the restaurant in Brooklyn, when I theorized that he had a type. “But I do enjoy layers — digging around, asking why, figuring it out. If it’s really clear what a character needs, I feel a little less intoxicated by it.”

When I asked Carey Mulligan, who has known Mr. Dano for 10 years, whether he is as inscrutable as his characters, she recalled the first time she met him, after performing in a play with Ms. Kazan.

“I was quite intimidated by him at first,” she said. “But then I discovered he’s not a serious person at all, really. He’s kind of goofy and really funny and he does everything he can to make people feel comfortable.”

Shooting “Wildlife,” she said, was her “favorite filmmaking experience ever.”

“He has such a graceful touch and will encourage you with the most gentle push,” she added. “I never felt like I could do anything wrong.”

Mr. Dano glanced at his phone, checking for baby updates.

With “Wildlife,” then “Dannemora,” and now “True West,” he had been running nonstop, the culmination of 14 unbroken years of momentum. But parenthood had permanently altered his priorities in ways that he couldn’t yet explain.

“You just don’t have time for the same things, including work things,” he said. “In certain ways that makes your life easier. And in a lot of ways it makes things harder.”

Some roles, however intoxicating, take a lifetime to figure out.