“The Clinton Affair,” A&E’s six-part mini-series on the scandals of Bill Clinton’s presidency, lacks a point of view. It is straightforward in style and evenhanded in tone. Strangely, this recommends it.

The events it covers have been so sensationalized and so politicized for so long that seeing them presented neutrally and in roughly chronological order is revelatory, particularly regarding the stories of three women: Paula Jones, Kathleen Willey and Juanita Broaddrick. These are the women who, in the 1990s, publicly accused the president of the United States of sexual harassment and assault.

It’s been a year for reconsidering Bill Clinton’s presidency and its players; December is the 20th anniversary of his impeachment. Ken Starr returned to defend his investigation in a memoir, “Contempt.” Linda Tripp reappeared on Capitol Hill, where she styled herself as a brave truth teller who faced a “high-tech lynching” for blowing the whistle. And Bill and Hillary are setting off on an arena tour billed as “An Evening With the Clintons.”

Much of the buzz around the A&E series has focused on the participation of Monica Lewinsky. Though the filmmakers — the director Blair Foster and the producer Alex Gibney — interviewed more than 50 subjects, including James Carville and David Brock, the one boldfaced name in the network’s news release is hers. This prime-time appearance caps her comeback. After spending a decade and a half out of the public eye, she has returned with a perch at Vanity Fair, a TED Talk and an anti-bullying cause. She has called herself “patient zero” of online shaming. She has emerged from years of media torture as an unexpected darling of the press.

The same cannot be said for Jones, Willey and Broaddrick. In the ’90s, they were dismissed as “bimbos” deployed in service of what Hillary Clinton called the “vast right-wing conspiracy,” and with few exceptions, their stories have remained relegated to the margins of respectable conversation. They have been featured not in glossy fashion magazines but in self-published memoirs and political smear campaigns. They have been used as right-wing pawns and left-wing punching bags.

In 2016, when they sat together in an on-camera interview during Hillary Clinton’s run for president, it was for the nationalist outlet Breitbart. And when they convened in public to tell their stories, it was in service of a Donald J. Trump campaign stunt at the second presidential debate; Steve Bannon could be spied stalking the perimeter. Their stories have been twisted in so many ways for so many years that it seems unworkable to unravel them now. 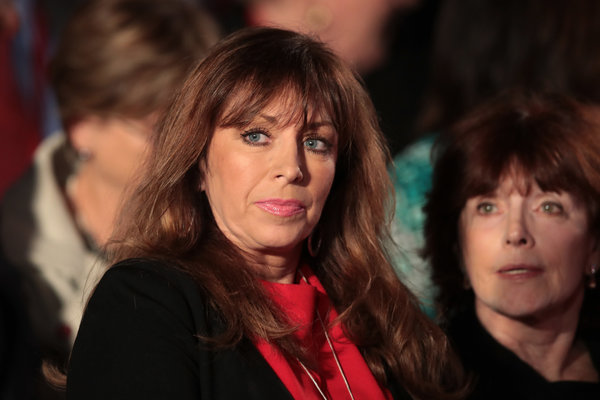 “The Clinton Affair” does the work. It quite literally shows these women in a new light. They are filmed in places that look like well-appointed hotel rooms. The lighting is soft and generous. The filmmakers place their stories on the same level as those of Lewinsky and Carville, of career F.B.I. agents and prestigious lawyers. As a result, a space opens there for them to speak about Bill Clinton but also about themselves. The series lifts their accusations from the tabloid gutter and repositions them in the context of their lives as women.

Paula Jones, in particular, rises. In 1994, she said that Bill Clinton had summoned her to a hotel room and exposed himself when he was the governor of Arkansas and she was a state employee. (Clinton has always denied the charges from Jones, Willey and Broaddrick). Later she filed suit against him for sexual harassment. Her story was politicized from the start: It was seized by a Republican operative, who urged her to go public at the Conservative Political Action Conference, the right’s annual activist spectacle.

In turn, Clinton’s advisers trashed her on television. Carville said this: “If you drag a $100 bill through a trailer park, you never know what you’ll find.” George Stephanopoulos compared Jones to Tonya Harding: just another woman seeking cash for telling a tabloid tale. (Even Harding — not the victim in that story — has since had her legacy revised.) The assessment lingered: In 2016, Vox published an “explainer” dismissing her charges as “probably bunk,” relaying, in part, that her description of Bill Clinton’s penis did not align with those of some anonymous sources.

“The Clinton Affair” gifts her a blank slate. The aspersions cast against her can be resolved here. Yes, she was poor: She sought out an Arkansas state government job in an attempt to transcend her only other options, “the Walmart and the Pizza Hut.” And yes, she leaned on conservatives; in a contemporaneous interview with Sam Donaldson, she explained, “Those are the only people that are coming to my defense.” In her new interview, she retells her story of harassment while fighting back tears. She appears guileless and helpful. In a word: credible.

Jones’s account is further clarified by Slate’s eight-part investigative history podcast “Slow Burn,” in which the journalist Leon Neyfakh pursues the uncovered stories of Clinton’s impeachment. If “The Clinton Affair” seeks an even retelling, “Slow Burn” snakes in and out of the narrative, teasing out themes and sorting out confusions. One of its achievements is in its meticulous documentation of how the harassment and assault claims against Clinton came to be politicized.

Jones’s representatives made efforts to place her story in mainstream newspapers, only to be frustrated by foot-dragging journalists. As Michael Isikoff, a Washington Post reporter at the time, puts it in an interview with Neyfakh, his editors “viewed it as tawdry.” (Isikoff was later ready to report the Lewinsky story for Newsweek, but higher-ups held it, according to “Slow Burn” and “The Clinton Affair”; Matt Drudge broke the news instead.) Later, NBC sat on the tape of an emotional interview with Broaddrick in which she accused Bill Clinton of raping her, finally airing the segment only after Clinton had weathered his impeachment and trial.

“Slow Burn” concludes with an episode about that NBC appearance. Through new interviews with Broaddrick and Lisa Myers, the NBC reporter who championed her story, it paints a convincing picture of a network news division that seemed incapable of handling assault claims against powerful men, no matter how credible or well-sourced. In the ’90s, these women’s stories cut directly to the biases of the mainstream media: that sexual harassment and assault were tabloid tales and that publishing anything that seemed to sway a political process was ill advised.

For the past several years, we have been recalibrating Clinton’s legacy through micro historical trends. When Lewinsky re-emerged in 2014, she aligned herself in the causes of the moment, speaking out against bullying and shaming. When Hillary Clinton ran for president in 2016, the accusers’ stories were again co-opted for political attack, by both the Trump campaign and Clinton supporters. An Emily’s List rep told BuzzFeed of Broaddrick: “Women know that this is an unfair attack on Hillary, and that’s why it continues to exist in this small corner of the right-wing media world.”

Today these stories are being re-evaluated in the context of the #MeToo movement. In an essay for Vanity Fair earlier this year, Lewinsky wrote that #MeToo had given her a “new lens” for seeing her own story: “Now, at 44, I’m beginning (just beginning) to consider the implications of the power differentials that were so vast between a president and a White House intern.”

Lewinsky has always been cast as the central female character of Bill Clinton’s scandals, and while that has been hell for her, it has been rather convenient for him. Over two decades, it was easy to forget that the reporting on Clinton’s consensual affair with an intern arose out of an even more damning context: Jones’s harassment suit. (It was Lewinsky and Clinton denying their affair under oath in the Jones case that gave Starr the material to pounce.) Paula Jones spoke out against the most powerful man in the world, and when his lawyers argued that a sitting president couldn’t be subject to a civil suit, she took them all the way to the Supreme Court and won. In another world, she would be hailed as a feminist icon. But not in this world — not yet.