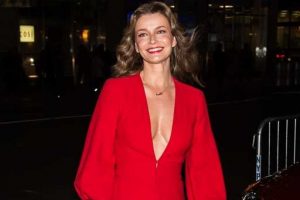 Paulina Porizkova is not averse to baring it all. In fact, vulnerability feels like the cornerstone of this new chapter in her life. And, once again, she’s taken the conversation around defying ageism a step further with a new video featuring the social media maven stripping down to her lingerie while denouncing ageist assumptions about women.

The Czech model recalled going on the internet one day out of curiosity, trying to find photos of women, particularly public figures, in their early-to-mid-50s. “There was nobody there. It was a big empty hole,” Porizkova said. The model also mused that “it wasn’t until you got to Betty White where old people got to be cool again.” But the through-line the model noted most was that “between [Jennifer Lopez] and Betty White is me.”

Porizkova noted that women in her age group are “kind of falling into the hole of being invisible between those two women and I’m not okay with that.” There was a certain turning point when Porizkova started to notice this change in how people saw her — and by extension women around her age. “I would say at around 45 I started noticing that the way I was perceived was slightly different than what I had become used to,” she said.

At that age, when Porizkova would post photos of herself in bikinis, she noticed a certain “influx” of commenters asking wether she was “desperate,” even telling her to “cover up.” Naturally, the unwarranted criticism didn’t sit well with Porizkova. “I was sort of getting relinquished to the ‘invisible women’ category,” Porizkova explained.

But these days, Porizkova is a lot more joyful, and is using her platform to demystify assumptions and subvert societal expectations about aging. After a dinner with a fashion photographer who seemed transfixed by Porizkova’s wrinkles, the model realized that she understands “what it takes to make my skin wrinkle-free and I don’t think it’s worth it.”

Right now, Porizkova wants to “embrace this body. As much as I’m proud of who I am, I’m also broken,” she confessed. “And I’m assembling myself. So, it’s not the greatest place to be yet. It will be though. It’ll be pretty freaking awesome.”

Before you go, click here to see celebrity women over 50 whose bikini photos are blowing our minds.