Home » Entertainment » Peeling Back the Paint to Discover Bruegel’s Secrets

Peeling Back the Paint to Discover Bruegel’s Secrets

AMSTERDAM — What would happen if you peeled back the layers of a masterpiece by one of art history’s greatest painters?

Take, for example, Pieter Bruegel the Elder’s large-scale festival scene, “The Battle Between Carnival and Lent,” which he painted in 1559. If we look at his first drafts of the painting, using X-ray photography, we can see a corpse inside a cart that an old woman is dragging behind her. Then we see another dead body on the ground, its face turned to the viewer; he is lying ominously close to a sick child.

But when we look at the final version of the painting — the one we see with our own eyes — these macabre elements aren’t there anymore. The corpse in the cart has been blotted out with brown paint; the body on the ground is shrouded in a white cloth. When and how did these dead people disappear?

New imaging technology, created by a project known as “Inside Bruegel” offers some insight into these questions, by allowing us to pull the painting’s layers apart. The project was developed along with the Kunsthistorisches Museum in Vienna, for “Bruegel” a once-in-a-lifetime exhibition, featuring 87 of the painter’s works, and which runs through Jan. 13, 2019.

“It’s a huge advancement if you want to look at Bruegel,” said Ron Spronk, a professor of art history at Queen’s University in Canada, and one of four curators of the exhibition. “You can actually see the creative process. You can follow the artist in how he makes decisions.” 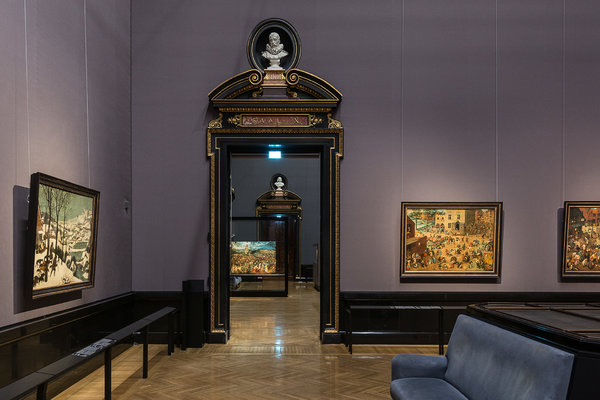 A leading painter of the Northern Renaissance, known for works like “The Tower of Babel,” “The Peasant Wedding,” and “The Triumph of Death,” Bruegel created meticulously detailed, chaotic worlds. They parodied religious themes, mocked piousness, presented death and destruction in surprisingly realistic detail and elevated peasants to central roles.

He showed us a comic, violent, and sometimes ugly universe of common folk at a time that the Spanish Inquisition was sweeping Europe in the 16th century.

On his death bed, Bruegel advised his wife to burn his drawings, for fear “that they were too caustic or derisory, either because he was sorry” or because she might get in trouble with the authorities, according to a 1604 biography by Karel van Mander. Was he afraid of retribution because his drawings were too subversive?

“One of the things that art historians debate quite seriously is to what level Bruegel was criticizing the government of that day,” Mr. Spronk said. “Those kinds of questions are still debated today.”

Bruegel himself made changes to his own compositions that might give us clues about his perspective. Like other 16th-century masters, he constructed his paintings painstakingly on wood panels, layer by layer. He started with a light-colored foundational surface, known as the ground, made of chalk and animal glue, on which he would sketch out his composition. Later, he would paint using oils.

In the center foreground of the painting, “The Battle Between Carnival and Lent” we see festivalgoers celebrating on one side and pious observers of lent on the other. They are engaged in a kind of jousting match. A rotund man holding a pig on a stick faces off with an austere penitent, holding a baker’s peel on which there are two fish.

If we look at an image of this painting made with infrared rays, though, we see that instead of the two fish, Bruegel painted a cross — a symbol of the church. He later removed the cross and added the fish, a traditional food served during the festival of Lent. But fish are also symbols of Christ, so it could just be a more subtle reference to the church.

“We don’t know,” which he meant, Mr. Spronk said. “This could be interpreted in many different ways.”

As to the painting’s corpses, Sabine Pénot, a curator of Netherlandish and Dutch paintings at the Kunsthistorisches Museum and another of the exhibition’s curators, said that Bruegel didn’t make these changes himself; someone else blotted out the dead body in the cart, and covered up the corpse on the ground, although nobody knows who did it or when, precisely. Ms. Pénot said it may have been in the 17th or 18th centuries.

Using the “Inside Bruegel” tools, we can see what he intended, and how others reacted, Ms. Pénot said. “You see Bruegel’s creative forces and in some cases you see what happened after him. You see the paint layer where you find these dead or ill bodies and then you encounter the intervention of someone later on to reduce these dark or shocking images.”

Ms. Pénot compares these changes to those that have been previously noted in Bruegel’s “Massacre of the Innocents,” which is currently in the British royal collection. (A copy, but not the original is included in the Vienna show, because it was too fragile to travel.)

“Massacre of the Innocents,” originally depicting the slaughter of children, is thought of today by some critics as one of Bruegel’s most strident criticisms of the atrocities of the Spanish Inquisition in the Netherlands. But some viewers must have felt that the violence he depicted was just too much to handle. At some point in history, either in the 17th or 18th century, Ms. Pénot said, someone replaced all the images of dead children with images of farm animals — and that’s how the painting stands today.

Using the web tool InsideBruegel.net, anyone can access 12 paintings from the Vienna museum and spend hours zooming in on these details. Initially funded by the Getty Foundation’s Panel Paintings Initiative, a decade-long effort to train panel paintings restorers, this technology has also been used to study the paintings of Bruegel’s fellow Netherlandish master Hieronymus Bosch, as well as the works of van Eyck, a 15th-century Flemish painter best known for the Ghent Altarpiece, “The Adoration of the Lamb.”

“You can access the website really as a novice and as a specialist,” Ms. Pénot said. “It’s a very important tool for conservation, but you can also make your own discoveries.”

Ms. Pénot said that researchers have discovered that, “Most of these paintings have gone through a modification. Either the panels were cut down, or they have been partly overpainted or details have been changed, either in Bruegel’s time or in later periods.”

Mr. Spronk said: “There still is a lot of debate as to what the meaning is, or what the layers of meaning are, in the paintings. The question of what Bruegel is trying to convey is not resolved.” He added that it was unclear if the painter was an anthropologist ahead of his time, “who wanted to show us images of peasants in their daily life, falling into the water, having a bowel movement in the grass,” or whether he was “pretty much just trying to make us laugh.”

“We don’t know the answer,” Mr. Spronk said. “We provide theses images so that people can make up their own minds.”