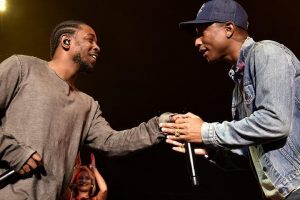 Pharrell took a moment to praise his frequent collaborator, Kendrick Lamar, as one of the greatest songwriters of modern times, explaining the amount of commitment and discipline the Compton rapper has for his music.

Speaking to Zane Lowe in his recent Apple Music 1 interview, Pharrell used the creation of K-Dot’s latest album, Mr. Morale & the Big Steppers, as an example. “Kendrick is one of the greatest writers of our times, and he is a great writer because he knows how to be very disciplined with a subject matter,” he said. “He knows that stickiness is important, and he knows that it has to feel great. So when we were making Mr. Morale, I watched the rhythms hit him and I watched it just bubble to the surface, whatever the song was making him feel, and I watched him commit to that, and I watched him stay disciplined.”

He continued, “He’s different. In terms of this album, this whole body of work, there’s a whole lot of conversations that not only we as Black men but just men, period, and even other matters, just humans needed to talk about. It was like nobody was really saying it, and if they were, they weren’t really saying it in a cohesive way, and he just raised his hand and said, ‘I’ll do it.’ This album’s going to be medicine to a lot of people.”

The Neptunes stalwart served as as producer and writer on Mr. Morale & the Big Steppers, working on the Tanna Leone-assisted cut “Mr. Morale.”

Watch the interview above.

Elsewhere in music, The Game announced the postponement of DRILLMATIC while calling out Rolling Stone for snubbing him in their “Greatest Hip-Hop Albums” list.
Source: Read Full Article