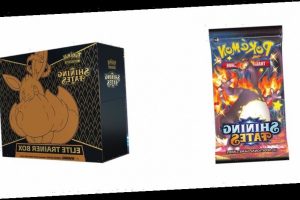 On top of the sought-after Elite Trainer Box which sees 10 Shining Fates booster packs, one foil promo card featuring Eevee VMAX and gaming accessories, the release also includes the below:

Now available around the world at participating retailers, there will also be Mini Tins and Shining Fates Premium Collections launching later on March 5. Head over to Pokémon TCG for more info.