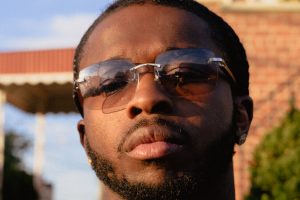 “Faith,” the second posthumous album from Pop Smoke, includes collaborations with Kanye West, Dua Lipa, 42 Dugg, Future and others. But this track, early in the album, is jarring and stark. Not simply because it’s still eerie to hear Pop Smoke rapping with a blend of menace and joy, but because of its chilling beat — produced in part by the rapper’s longtime collaborator Rico Beats, but also in part by Nicholas Britell, who has scored “Moonlight” and “Succession.” It is a familiar trick, these reverberating keys that stand stern sentry, but no less effective for it. Here is a splash of theater more visceral than any radio hit, any pop crossover. JON CARAMANICA

Xenia Rubinos, ‘Working All the Time’

Xenia Rubinos’s “Working All the Time” is only two minutes long, but it’s as intricate as an arduous jigsaw puzzle. There are waves of skittish synths, air horns straight out of a Funk Flex set on Hot 97, a bridge that sounds like the glitchy maximalism of hyperpop, and last but not least, an interpolation of the traditional rumba “Ave María Morena.” Somehow, Rubinos makes sense of all these disparate pieces using her brassy, featherlight voice. Blink and you’ll miss that it’s a workers’ anthem, too: In one verse, Rubinos sings, “You better keep me poor and busy or I’d be a danger.” It’s a warning for those who try to crush the power of the people. ISABELIA HERRERA

Swedish House Mafia, ‘It Gets Better’

I suppose you can absorb this song on the internet, where it is currently available. But the slick return of Swedish House Mafia — the Brobdingnagian kings of mainstream EDM, the clout champions of biggest-room house music — cries out for an open field, a dizzying laser show, a loss of sense of time and place. Hug a friend; the soundtrack of shared mayhem is upon us. CARAMANICA

A brisk, ratcheting, evolving ska-meets-trap beat carries “Whenever You’re Ready” by Mahalia, a British singer whose mother is Jamaican. It’s a semi-breakup song that flaunts confidence instead of pain. The singer is letting him go because he’s angry at her now, but she’s sure he’ll be back: “You won’t be gone for good,” she sings. “No, I’m not worried.” JON PARELES

Caroline Polachek, ‘Bunny Is a Rider’

Singing about a woman so elusive that a “satellite can’t find her,” Caroline Polachek makes staccato syllables and short phrases bounce all around the beat, working equally as percussion and melody. They’re just a few of the syncopated layers in a playful yet strategic production — by Polachek and her frequent collaborator, Danny L. Harle from the PC Music circle — that juggles whistling, triangle, birdsong and the giggles and gurgles of Harle’s baby daughter. “I’m so nonphysical,” Polachek exults, over the sustained bass tone that cushions the chorus. Nonsense: The song is built for dancing. PARELES

“Rom Com 2004” could have been a straightforward indie-rock love song, vowing “Just let me be yours like no one else before” over a march beat, guitar chords and a chorus with a proud leap in the melody. But Soccer Mommy — Sophie Allison — handed over her demo to the producer BJ Burton with instructions, she has said, to “destroy it.” He obliged with glitches, distortion, speed variations and exposed moments — making the song more appealing because it plays hard to get. PARELES

From the forthcoming Turnstile album, “Glow On,” comes this shoegaze space-soul collaboration with Blood Orange (Dev Hynes). The video compiles mayhem-esque live footage more in keeping with the hardcore band’s usual rhythms, but perhaps this is the meditation before the rage. CARAMANICA

Dave McMurray is a longtime Detroit tenor saxophonist with decades of experience in rock, jazz, pop and R&B, mostly as a side musician. But he’s just released his second album for Blue Note as a leader: “Grateful Deadication,” a tribute to the Grateful Dead songbook. His cover of the classic “Dark Star” channels the epically trippy M.O. of a Dead performance: McMurray declares the melody over Wayne Gerard’s twinkling, distorted guitar; eventually, a dug-in backbeat sets in. Then a coolly grooving section opens up, and the saxophonist dishes out a solo that’s laced with greasy Motor City attitude but still takes its time, as if to bask in the California sun. GIOVANNI RUSSONELLO

The songs on “Mythopoetics,” Nandi Rose Plunkett’s new album as Half Waif, suffer and exult in all-consuming love. As “Swimmer” leaps from everyday sensation to all-out devotion and need — “I want to know they can’t take this away from me” — synthesizer arpeggios and vocal harmonies swarm around Plunkett’s ardent voice, like a suddenly racing heartbeat and an uncontainable obsession. PARELES

A viscous tar pit of a track — slow, oozing bass tones, sparse drum-machine taps and gaping silences — hints at the difficulty of pulling free from an increasingly destructive relationship. Yas (the songwriter, singer, producer and violinist Yasmeen Al-Mazeedi) sings about being “in love with the idea of you” amid details of mental and physical abuse. The negotiations aren’t quite over; her voice rises to a fragile soprano as she decides, “You think that I want you back — I don’t.” PARELES

Koreless — the Welsh producer Lewis Roberts — swerves between pastorale and rave on “White Picket Fence.” A keening female voice, uncredited and possibly built from samples, floats at first over a stately harpsichord; then fuzzy synthesizers arrive with a pulsing beat under that vocal melody, before it gets stretched and chopped up; then it’s sent back to harpsichord territory. In the video, directed by FKA twigs, club creatures climb out of a futuristic green car alongside a bucolic creek, where fishing ensues; urban artifice meets Nature. PARELES

To a friend who’s still tearful about her ex, the Colombian songwriter Karol G (Carolina Giraldo Navarro) doesn’t mince words in “200 Copas” (“200 Drinks”); she dismisses the guy with profanities after all the suffering he caused. Yet her 21st-century bluntness gets a traditionalist backing; while the rest of her album, “KG0516,” traverses modern Pan-American pop with all its technological tricks, “200 Copas” is an old-fashioned waltz backed by a few acoustic instruments, nothing more. The lyrics are decidedly impolite, but the predicament she sings about is not new. The new video has her leading a beach-bonfire singalong: solidarity against undeserving men. PARELES

“Dynasty” is a new collaborative album from Tainy and Yandel, two titans of reggaeton celebrating 16 years of eminence. With its sinister harpsichord, muted marimbas and a piercing dembow riddim, “El Plan” recalls the mid-00s reggaeton that required listeners practice dancing in front of the mirror. It’s all about the thrill of an after-hours dance-floor chase — the electrifying, will-it-or-won’t-it-happen energy of a night at the club. “Estoy esperándote y tú perreando sola,” Yandel says. “I’m waiting for you and you’re dancing alone.” Luckily, he knows he’s at the whim of his partner: “Pero tú dime cuál e’ el plan.” You tell me what the plan is. HERRERA

It is easy to reference folkloric sounds, but have little to offer other than mere nostalgia. The instrumentalist Brandon Valdivia, better known as Mas Aya, escapes this fate masterfully on “Momento Presente.” More than a mere collision of past and present, the track is a study in the power of harnessing ancestral knowledge. Over six and a half minutes, Valdivia braids a skittish footwork beat with a flurry of Andean pan flutes, arpeggiated synths and polyrhythms. Halfway through, the voice of an elder reflects on centuries of protest, a reminder that the work of liberation is part of a continuum. One moment the song is celestial, transporting the listener 40,000 feet into the air. In another it is meditative, urging us into quiet introspection. HERRERA

In recent years the pianist Matt Mitchell and the drummer Kate Gentile have developed a book of pithy, one-bar-long compositions, which they play with small ensembles under the name Snark Horse. Through intense improvisation, taking equal cues from free jazz and metal, they morph and distend and scramble these little melodic fragments. On Friday, Snark Horse released its first album — a boxed set spanning no fewer than 49 tracks and five-and-a-half hours, mostly recorded at a three-day session in late 2019. “Trapezoids” is a Mitchell composition, a crooked and incessant spray of notes, with Jon Irabagon’s saxophone further destabilizing the mix. It’s paired on this track with “Matching Tickles,” a Gentile piece, which Mitchell plays more softly and abstractedly, as if it were the echo of another idea. RUSSONELLO