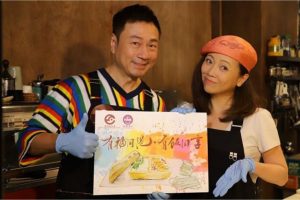 The roles not only propelled Lai and Tang to stardom, they were named Best Actor and Best Actress at the TVB Anniversary Awards in 2009. The television serial also won Best Drama Series.

On Thursday (May 28), Tang posted on social media photos of her, Lai and several others preparing meals for low-income families.

She also posted a photo of her and Lai together with the caption, “We meet again after a long time.”

The photo was shared by Lai on his Weibo account, with the caption, “Sharing our care together.”

Several netizens said the photos of them together made them nostalgic for Rosy Business and they hoped to see the pair back together on screen.

Rosy Business was so successful in 2009 and Lai and Tang’s pairing so popular that TVB produced a companion piece starring most of the original cast, No Regrets, in 2010.

No Regrets was critically acclaimed during its broadcast and the second highest-rated television drama of 2010 after palace drama Can’t Buy Me Love.